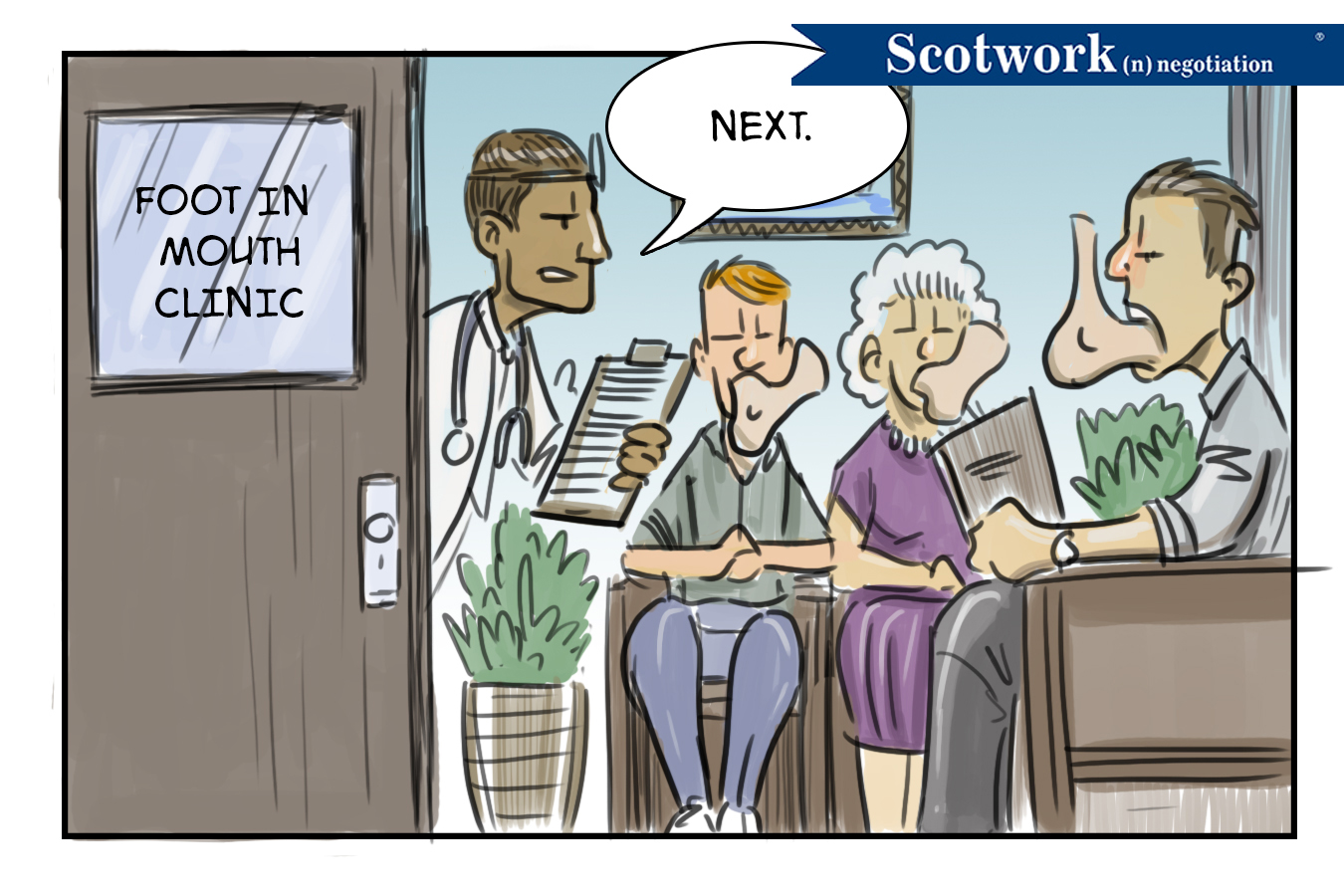 After being sequestered for five days in a hotel meeting room, three days in sales meetings and two days in negotiation training, the people we were training wanted out. It’s no wonder that when the hotel walked in that late afternoon with the dinner menu the team erupted, “Not again! We need to cancel dinner and go off site!” The team’s admin told them it wasn’t possible because they had a contract to do dinner and it was too late to change.

After listening to the bickering and the admin’s insistence that nothing could be done something came over me and I said, “Well, maybe there’s something we can do…” The admin looked at me angrily, the participants looked at me with hope, and my two colleagues looked at me in fear. That’s when I realized I put my foot in my mouth. The class pinned their hope on me, the negotiation instructor, to get them out of this contract. Thus the fear my colleagues had because they knew if I wasn’t successful all of our credibility would be lost. How was I going to extract my foot from my mouth?

It was too late for me to back out. These people were excited. They wanted to have dinner offsite. I didn’t want to let them down but the admin was right, they had a contract. It was only two hours before dinner and most hotels would tell you it’s virtually impossible to cancel at this point. But I had to try.

The first step was to come up with a persuasive argument to the hotel for why we needed to cancel dinner. If that argument didn’t work, then I’d have to try to find a way to negotiate an alternative plan. While I waited for the Food & Beverage manager of the hotel, I started planning out my argument. When Holly, the F&B Manager arrived, I went to work, “Holly, these people have loved staying at your hotel. Your staff has been great and the accommodations are very nice. I know they will consider coming back for future events. However, they have eaten dinner onsite for the last four nights and they need to get out tonight. We need to cancel dinner here so we can take them out. I know if you were do that for us, then that will all but guarantee this group’s return for future events.”

I thought that was a pretty good persuasive argument. Apparently Holly did not. Her response was, “We can’t cancel. Dinner is less than 2 hours away. We brought extra staff in to serve dinner. We’ve already purchased your food. It’s just not possible at this point.” That was not the answer I wanted to hear! I tried a little more persuasion but it was clear that Holly wasn’t budging from her position. I wasn’t too sure what to do next so I just started asking questions about her position… what’s your normal cancellation policy? how many extra staff? when do you place your food order? Etc. I just wanted to understand her POV as best as I could.

Holly was not that forthcoming with information, till I asked, “Under what circumstances could we cancel dinner tonight?” And she said, “I don’t know”. I asked her if she could find out for me and she said she would. That’s when I knew I had a possible opening. Any answer other than “none” would indicate to me that there is an alternative path forward.

I started preparing my ask. It was highly unlikely that cancelling dinner would not incur some sort of cost but the real question is, “what did I want in return for that cost?” Was it enough to just pay and leave or could I get something else too? One thing I knew is that I would not get anything I didn’t ask for. So I quickly started to pull together my ask and formulate my concessions.

When Holly returned she said, “I talked to my manager and she said it would be a $400 cancellation fee.” Movement!! I asked her a few more questions about how they came up with the fee and it turns out they needed to pay the staff regardless if we did dinner or not. I told her I had to check with our admin to make sure that was ok. When I spoke to the admin he said, “Do it! I’d rather pay the $400 then have this group mad at me.” I told him I think we can do something to help calm the tension in the room while helping the hotel keep their staff busy.

I came back to Holly and countered, “If you could set up an open beer and wine bar from 5P - 6P and help us get reservations at an offsite restaurant at 6:30P, then we’ll agree to your $400 cancellation fee. Will that work for you?” She said she had to go check with her manager. Ten minutes later the banquet captain walked up and asked, “Where would you like your bar placed?” Victory!

I learned a few things that day:

I wish I could tell you I don’t put my foot in mouth anymore, but that’ just not true. I still act sometimes before I think. However, I am much more versed on foot extraction techniques than ever before!

Keep Your Foot Out of Your Mouth - Call Us!

We’ve all been there! If you are there now and need help with getting your foot out of your mouth - call us. If you want to keep your foot out of your mouth - call us. We help all different levels of negotiators get better deals. No matter how skilled you are or how much leverage you have, we'll help you get prepared for that critical negotiation and then we'll coach you all the way through it. Don't wait till it’s too late - talk to one of our experts today.

Brian Buck
More by Brian Buck:
Reopening and Renegotiating
You’ve Been Lied To - Part 2
Back to Insights