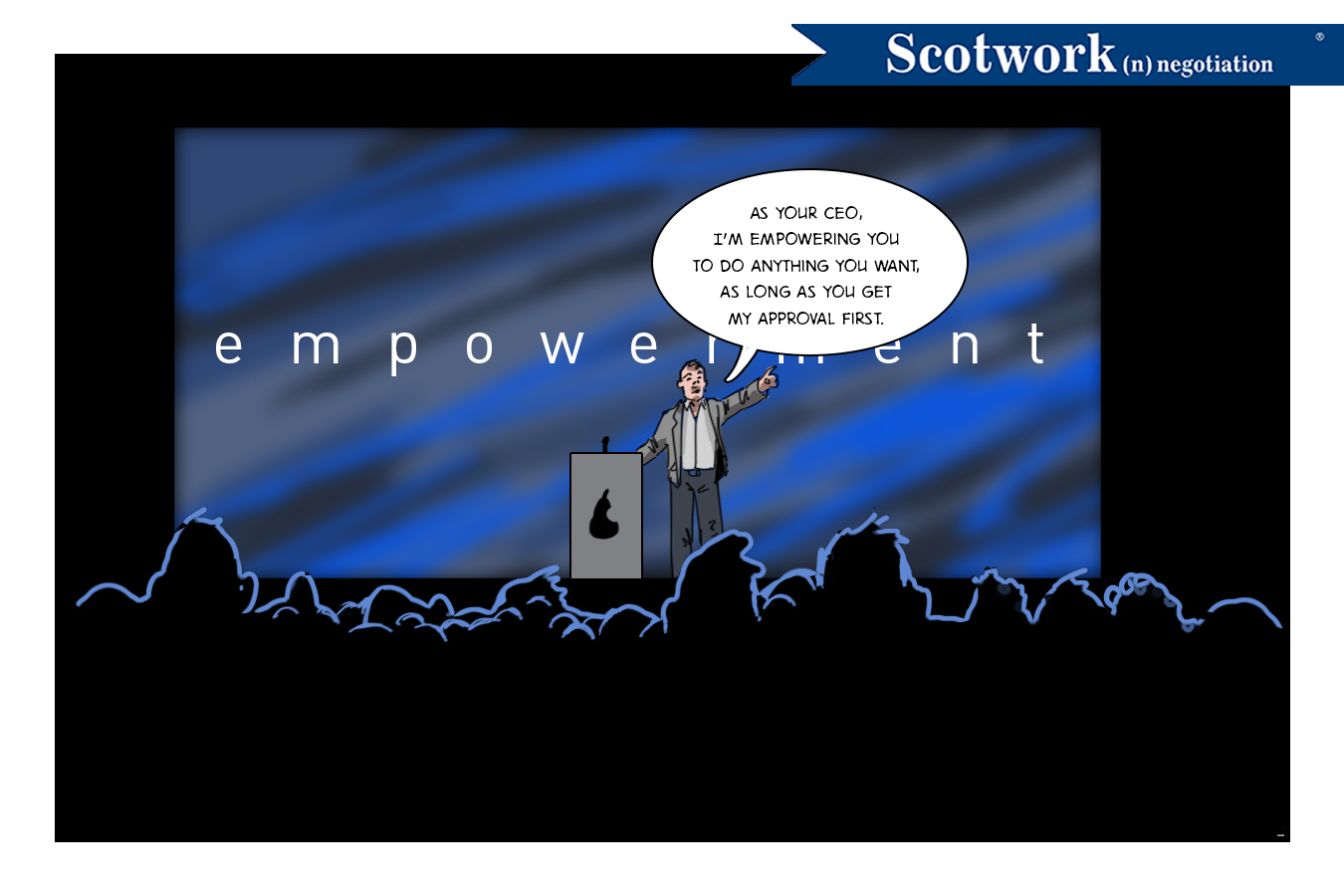 I asked my teenage daughter, the artist, “If you were offered a well-paid commission to paint a mural, but under the condition that you had to get every brushstroke approved before you applied it, would you take the job?” She laughed and said, “That’s not how creativity works. Besides, if you’re hired to do a job, you should be allowed to do the job.” Then she told me I was weird. Weird or not, she’s right — creativity does not work that way, and we should let people do the jobs they were hired to do. But every day at the dealmaking table, we kill creativity and value creation by how we constrain our negotiators. You want to improve your bottom line? Let your dealmakers do their job. Here’s how . . .

We surveyed thousands of dealmakers and asked them if they were empowered to negotiate an outcome. Only 27% said that they were always empowered to do so. That means well over two-thirds of those dealmakers can’t complete a deal without seeking approval or blessing for what they’re doing (i.e., getting approval for their brushstrokes). This is killing creativity and, thus, eroding value and prolonging the dealmaking process.

Before I go on, let me state that I’m not a proponent of unlimited authority, nor am I advocating relinquishing management oversight of responsibilities. However, when it comes to sending negotiators in to make a deal, the enlightened leader finds ways to empower their dealmakers. Today, many dealmakers have so much internal red tape to contend with that they’re not creating the highest valued deals; rather, they’re creating deals that have the highest probability of cutting through red tape in order to be approved. Talk about missed opportunity.

If I’ve just described your environment, chances are two-thirds of you fall into this category. Here are some things you can do to empower your dealmakers to be better negotiators:

Most red-tape-heavy processes we’ve seen have to do with ensuring that all key stakeholders are aware of how deals will impact them. Instead of consulting with them at the end, start talking with them before you walk into the room to strike a deal. The more that the stakeholders know about a deal’s strategy and objectives before negotiation begins, the more comfortable they will be — and the more likely they will be to support the negotiator throughout the process.

Focus on the outcomes.

Negotiators who are empowered know the negotiation’s objectives and precisely what is expected of them; they are then expected to develop and execute a strategy that delivers on those objectives. Meanwhile, those less empowered tend to be unclear about the objectives and are typically told how to conduct the negotiation, with little latitude allowed. The empowered negotiator is judged by the outcome, while the unempowered negotiator is judged by how well they managed the process.

Make it about accountability, not consensus.

Consensus building leads to abdication of responsibility. We’ve seen numerous processes in which a deal’s “sign-off” is required by many people. This creates circumstances where successful deals will have many parents, but failed deals will be orphans. When there is no accountability, how is success celebrated? How do we learn from our failures? Instead, enlightened leaders encourage a diversity of ideas and dissenting opinions to be heard in order to strengthen the position and approach, but they also make a single person or group accountable for creating a valuable deal.

Having process and structure is good — it helps organizations to be more efficient and replicate results consistently. However, an overbearing bureaucracy can be devastating to a dealmaker’s ability to negotiate valuable deals. As my daughter told me, don’t be weird — empower your negotiators.

Let Us Empower You!

Brian Buck
More by Brian Buck:
It's Not the Phalange!
Someone is Always Watching
Back to Insights