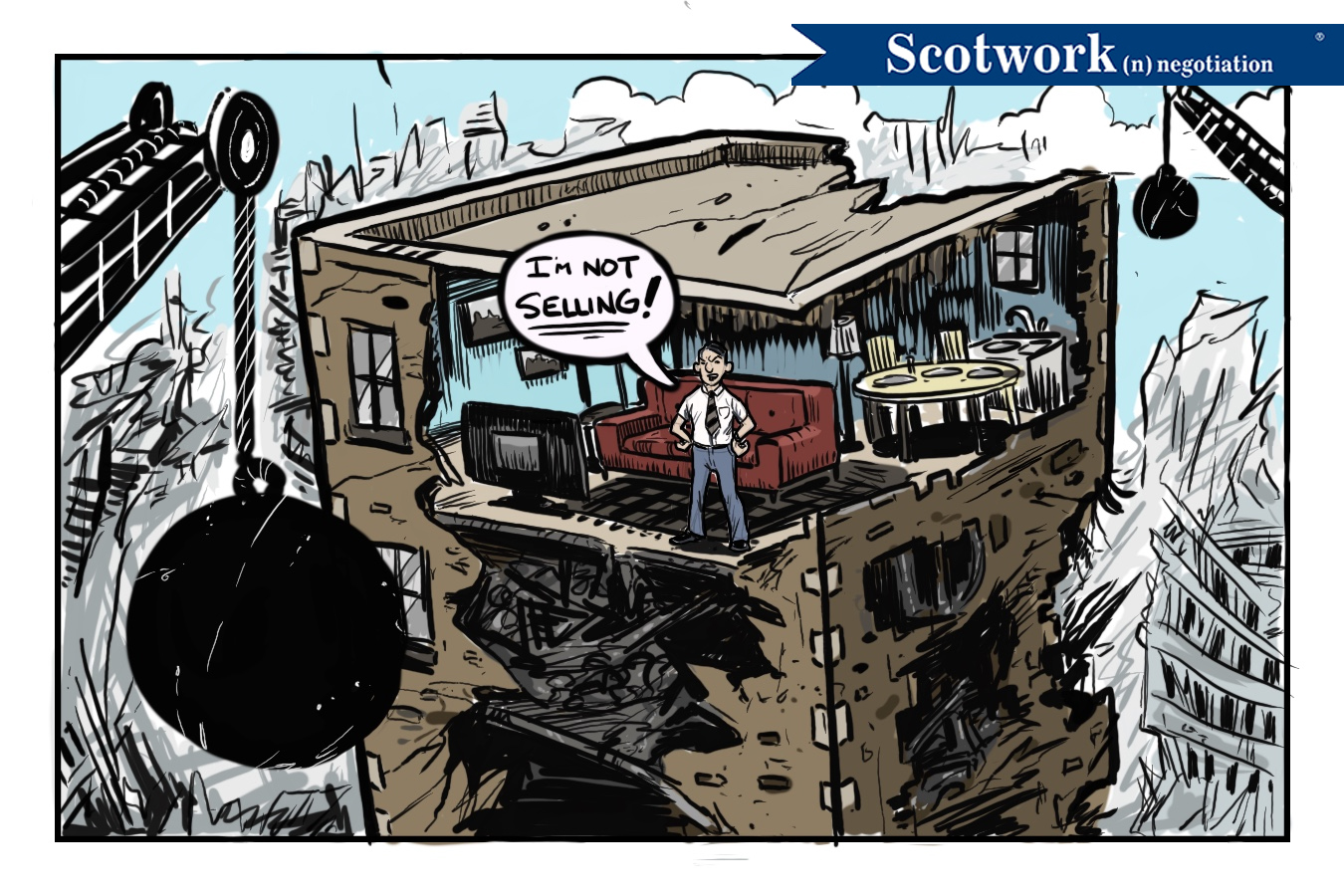 New York City real estate has always been a land of extremes. Recently, a penthouse apartment with five floors listed for $98M, currently the highest priced residential condo for sale in the city. The Big Apple also holds the record for the highest priced sold home in the country, which closed earlier this year at $238M, more than two times the previous record (also, not surprisingly, in NYC). The city also holds the record for the most expensive eviction ever, at $17M — and the story behind it is amazing.

Learning to play in this high-stakes high-rise market can yield huge dividends. Some winners can attribute their success to learning over time. But in at least one case, winning was based on leveraging time. Such was the story, several years ago, that involved a big-time developer and a hermit (of sorts) living in a rent-controlled apartment. Herb Sukenik was the last holdout in a high-rise — in a one-room apartment atop the Mayflower Hotel. A developer bought the building with four elderly tenants still in place and had the legal responsibility of coming to terms with them for their “voluntary” departure. This was necessary in order to tear the building down and make way for the planned development of the swanky 15 Central Park West.

Three of the four tenants departed with little effort or persuasion on the part of the developer. One received $650K, while the other two received $1M each. These are common sums paid out to tenants in such situations. With 73-year-old Sukenik, however, it was different. He made his demand known early on, and it wasn’t primarily about money, since he was self-sufficient, living off an inheritance he received from his late father. He simply said he wanted a new apartment with a park view. The developers found the perfect spot overlooking the park in an apartment that was almost eight times the size of his current residence. They even agreed to buy and lease to Sukenik until his death. The one demand they did not agree to was free meals twice a week at the building’s restaurant, run by a world-renowned chef. That’s when the deal changed. Sukenik informed the developers that he no longer wanted just the apartment, but he also wanted money, a lot of money, and he now was represented by an attorney.

The developers tried to negotiate an agreement, while also making Herb Sukenik’s living conditions burdensome as they began the demolition process. The noise and dust were not factors that would deter Sukenik; instead, he dug in and played the waiting game. After two years, the impasse was broken when the developers offered him $17M, plus a new apartment for life (his original request) at a rate of $1/month. The hermit accepted and two days later the building was leveled, making this the most expensive eviction amount ever paid.

Was Herb Sukenik, flanked by his attorney, a master negotiator? Did they outsmart the developer and their attorney? Or did this simply come down to a waiting game? While this story contains many learning points worthy of business school case studies, there are some that stood out for me that all negotiators can take away right here and now.

One point is that Sukenik simply knew what he wanted — a place to live with the same view that he had and a couple of nice meals a week. In hindsight, it was a small price to pay for the developer, who would ultimately turn this into one of the highest priced addresses in all of New York City. But it seems the developer lost sight of the objective and allowed a couple of meals to get in his way.

Simpler yet, the variable Sukenik controlled was time, something he had plenty of (he lived in that apartment for nearly 40 years), and he turned time into a very large bargaining chip. By contrast, the developer didn’t know how to create a sense of urgency for Sukenik, which gave Sukenik the ability to just wait it out.

And so the lesson is don’t play high-stakes negotiations unless you know what you want (your objectives) and you understand the variables at play (your leverage). After all, what’s the cost of those free meals now?

Randy Kutz
More by Randy Kutz:
The Destination Is NOT the Mission
Creating Value at the Bargaining Table
Back to Insights