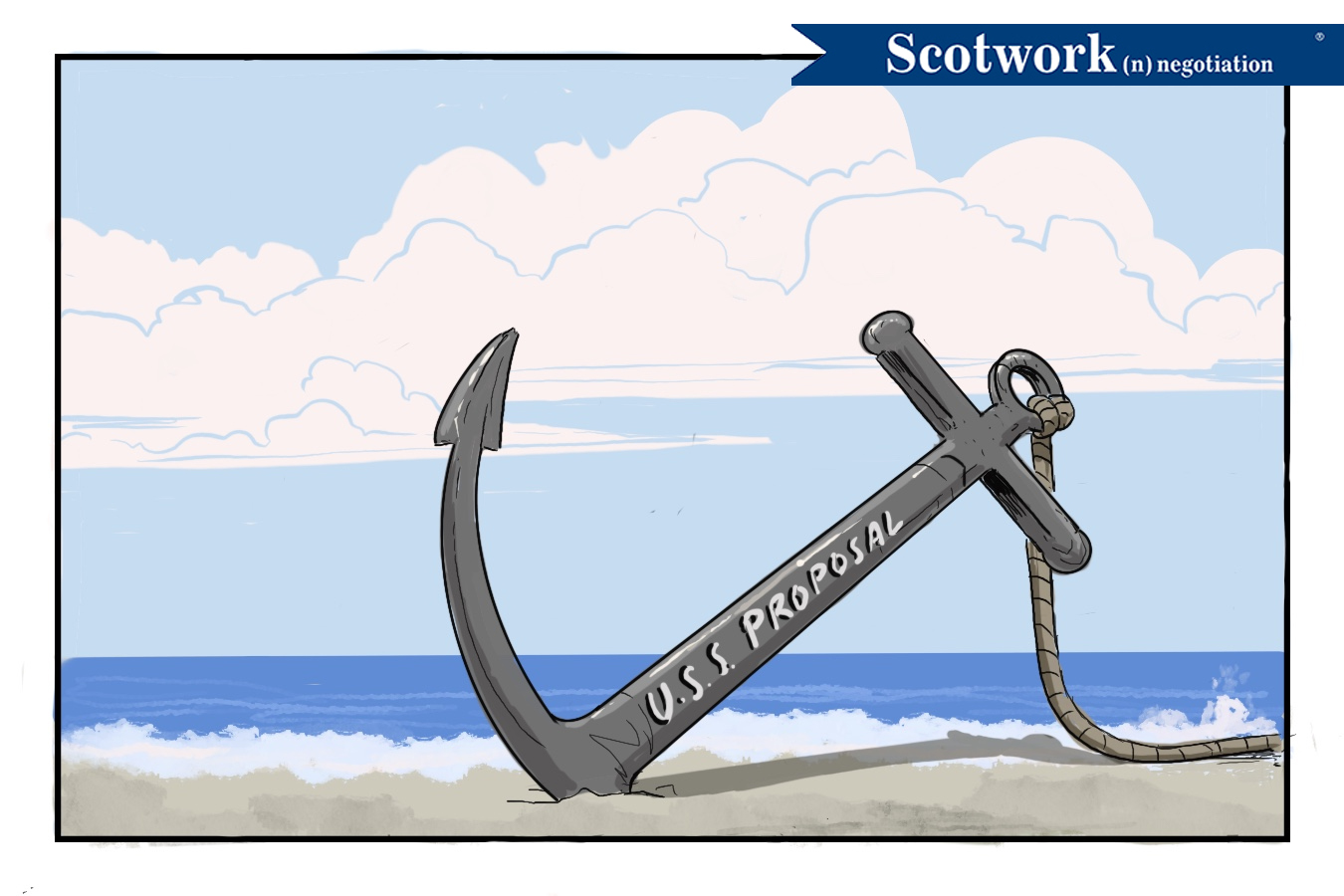 The other morning, I went for what seemed like my millionth pandemic walk, when I ran into my neighbor. We got to talking about our professions (well, probably more like loud talking, since we were at an exaggerated social distance). He runs a recovery clinic, and I run a negotiation consulting firm. As soon as he heard that I was a negotiator, he asked, “I’ve heard anchoring is the most important thing to do in a negotiation, right?” It got me thinking: Is that the most important thing in a negotiation?

In the parlance of negotiation, anchoring is the act of making a first proposal in hopes of creating a firm baseline from which the negotiation will happen. In terms of game theory, the player who proposes first will have the greatest advantage (think: Prisoner’s Dilemma), because the anchor will happen closer to the proposing party’s most optimistic position. If neither player makes a proposal, they both lose in terms of how long the negotiation will take and the ability to create value. In practice, making the first proposal, or anchoring, does give a distinct advantage, with one caveat: The anchor must be credible.

Every negotiation will have its own definition of what’s credible. At a relationship level, it’s about the trust that both parties have in each other. If you don’t trust the other party — i.e., believe that they’re going to uphold their end of the bargain — then nothing they say will be credible. However, in many negotiations both parties may not know each other or even have a history of working together, yet deals do get done. In situations like these, the parties establish what I call deal rapport. This is where they build micro-trust throughout the negotiation in order to get a deal done. It’s based on small gestures and shared accomplishments to create momentum and demonstrable trust. Deal rapport will help push the deal forward, as it provides a framework for relationship credibility during the negotiation.

For a proposal to be credible, it must be market-relevant and address all the issues at play. If you make a proposal that’s 2X the market value, you run the risk of being viewed as greedy or out of touch. When the proposal is so unrealistic, it will never catch so as to anchor the negotiation. In fact, it may send the negotiation adrift, wasting time and eroding trust.

The same holds true for a proposal that doesn’t address the critical points of conflict. Assume that there’s a conflict surrounding a point you’re concerned about (point A), a point the other side is concerned about (point B), and a point that you both care about (point C). Now, assume the other party provides a proposal that addresses only point B and point C. How would that make you feel? It would probably leave you wondering, Hey! What about point A? At which point, you’re unlikely to view it as credible, because it doesn’t address your concern (point A). When either party’s concerns are left out, the proposal is not viewed as credible by the other party and the anchor cannot take hold.

Here are some tips to be more credible:

If you’ve ever been in sales, you know that establishing rapport is one of the first things we do. There are many ways to do this, but I find that it starts with making a great first impression with the right tone, a friendly demeanor, and the appropriate appearance. Then it’s about getting into a meaningful conversation by being interested in what’s happening in the other party’s world and asking questions about them while actively listening. Finally, project confidence that you’re the person with the authority to negotiate (no one wants to waste their time with someone who can’t get a deal done).

Understand all of the issues at hand

Know the market before you sit down at the negotiating table. Do your due diligence. If this is an existing partner, review all previous contracts and agreements, and make sure that you understand what the pricing or terms have been. If it’s a new client or vendor, review what you’ve done with other clients or vendors, so that you better understand the market. In addition, do some research to understand more about their actual business: Are they market leaders or just trying to establish themselves? The point being, to be market-relevant you must understand the market.

So . . . back to my neighbor’s question: “Is anchoring the most important thing to do in a negotiation?” In the fog of that early morning, I told him, “If you’re credible, then anchoring is effective.” He quipped, “Just as in life, credibility matters.” So true.

We Can Be Your Anchor

Clichés are usually clichés for a reason — they’re based in truth. Yes, anchoring is important, but doing it correctly is more important. Let us help you do it credibly. Drawing on 45 years of real-world negotiating experience, we’ll assist you with getting better deals, saving time, and creating value for all involved — not to mention preserving and even strengthening relationships. Let us partner you with one of our advisers, ensuring that you’ve got the broadest view of your deal.

Brian Buck
More by Brian Buck:
What a Truck Taught Me
Me, Me, Me!
Back to Insights