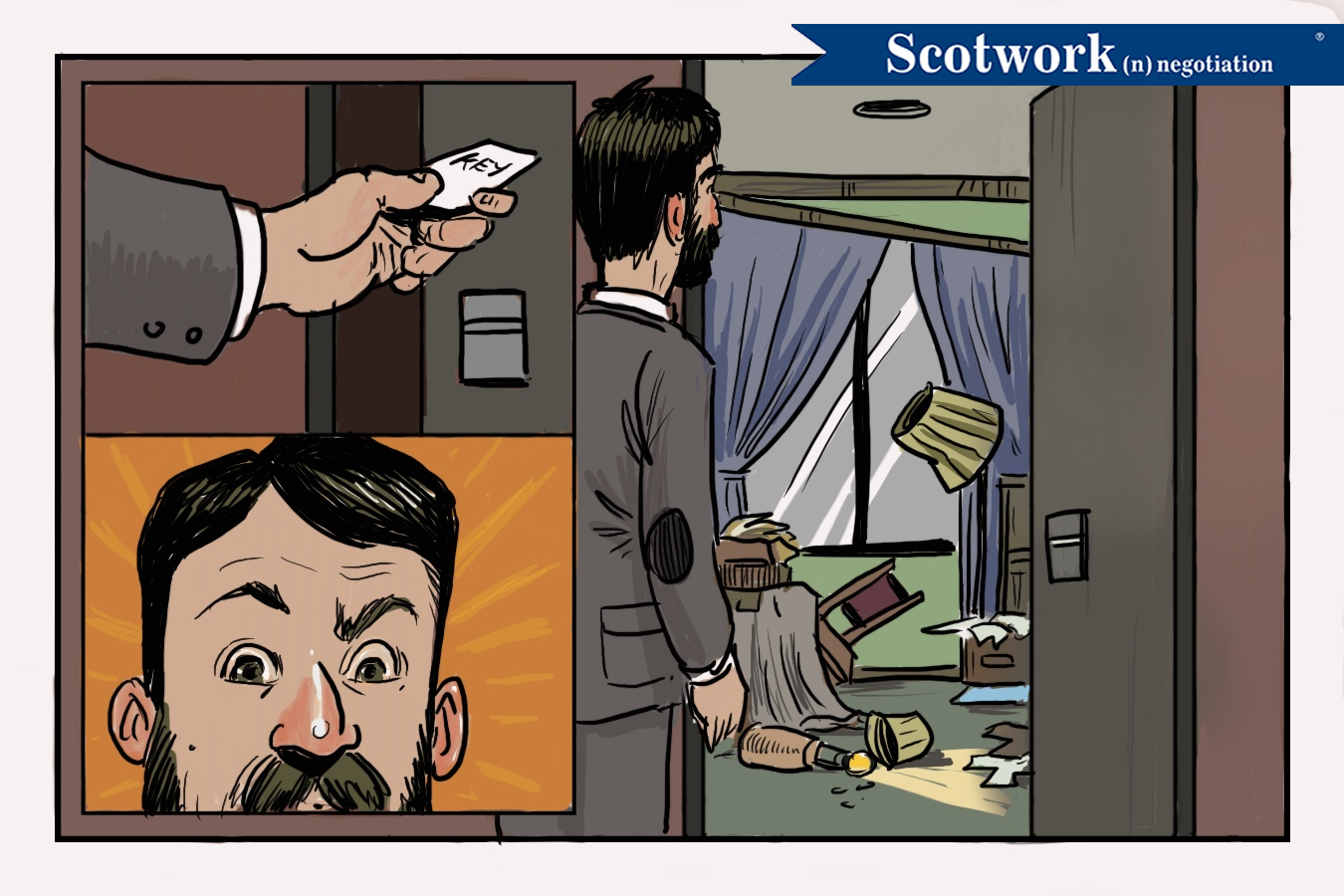 When the phone call came, all we heard from our colleague was, “You’re kidding me!” We were finishing up a celebratory team dinner at the resort we were staying at, and we discovered that our colleague’s room had been broken into and all of his belongings stolen. And by “all,” I mean everything, including passports, credit cards, car keys, and laptops. Needless to say, it cut the celebration short. I paid the bill and headed to his room to figure out what to do. All I knew was that, at some point, the property’s management and I were going to have a few words about how to rectify the situation.

All told, the loss was about $4,000. Obviously, this amount didn’t include the massive inconvenience of having to get everything shut down and replaced. His room was on the second floor. The burglar apparently came through the sliding door on the balcony, as evidenced by the open balcony door and the fact that the security bar on the room’s front door had been locked (presumably to prevent entry from the front). My colleague also received a fraud alert via his credit card from a gas station located 15 minutes from the resort. Unfortunately, the hotel’s security was limited: There were no cameras in the area, and there wasn’t sufficient personnel to patrol the expansive property. As we considered what happened, it was clear that the hotel wasn’t doing enough to deter, much less prevent, incidents like this.

We had selected this hotel for our annual team meeting. I invited our entire North America team as well as global leadership for this special occasion to celebrate our 20th anniversary in the region. As details of the burglary unfolded, I began to hear about other security concerns: broken in-room safes, unlit pathways, burned-out overhead lighting, unresponsive staff regarding guest concerns, etc. As my team shared all of these relatively minor things that became more of an issue in light of the burglary, I felt that we had a legitimate complaint.

My first step was to notify our banquet manager and his boss of our issue. I was clear not only about the issue, but also about my expectations in terms of making the situation better, including next steps. Shortly after submitting my complaint, I was visited by the head of security and banquet manager. As predicted, they were empathetic and apologetic. I restated my opening position and let them know how this had impacted us. I told them, specifically, what I needed to make the situation better. The ask? Provide enough credit/rebate to our bill to cover the loss of belongings and make up for the inconvenience.

The ensuing debate was brief. Since I was clear about what we wanted, the conversation moved quickly from apologies for what happened to what needed to be done to make it right. While the situation was unfortunate, it does illustrate what to do when you’ve been aggrieved. Complaining is easy, but it rarely leads to resolving the situation in a manner that’s acceptable to you. If you can take a moment to think through what you need, then you can drive toward a resolution that you can live with.

Don’t Get Ripped Off

If you have a complaint with no resolution, call us. We can help you stay calm and resolve the situation in a manner that you can live with. If you caused the complaint and need to resolve it amicably, call us too. We can be there to guide you the entire way. We’ll assist you with getting better deals, saving time, creating value for all involved, not to mention preserving and even strengthening relationships. Let us partner you with one of our coaches, ensuring that you’re never alone on any deal.