The $5 Loveseat and the Great Haggle 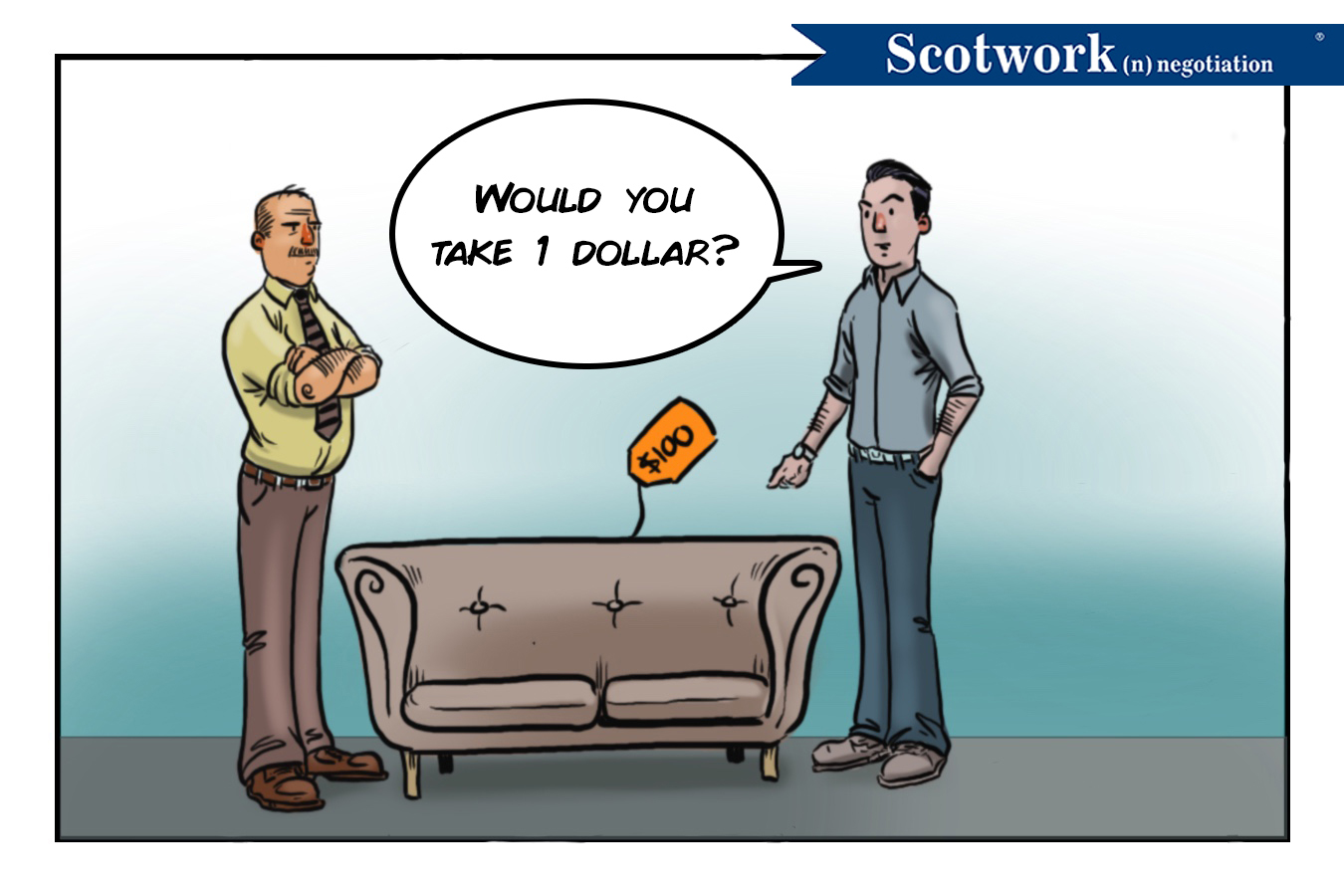 My dad is a notorious bargain hunter with an incredible sense for how to close a deal. So it came as no surprise when I got a text from him that read, “Just picked up a leather loveseat recliner for $5 — thing is like new! I spent more on the conditioner than I did on the couch!” When I asked him how he did it, I got a blow-by-blow account from a haggler deep within his element — a man with a leather-clad trophy and a story to tell.

Haggling often gets confused with negotiating. Negotiation, by our definition, is the act of trading something of lesser importance for something of higher importance. It usually involves more than one variable. Haggling is about how a single variable is divided among the parties involved. For instance, a typical negotiation might occur around trading volume for a price concession. A typical haggle, on the other hand, would focus solely on price and how much (or how little) to pay.

A negotiation has the potential for both parties to “win,” because there are multiple variables involved and both parties are using those variables to trade for things they want. Whereas in a haggle, typically one party has to lose in order for the other party to win. Consider haggling over the price of a car: In order for you to pay less (win), the dealer would have to reduce the price (lose). You may reach a price you’re both satisfied with, where you’re willing to complete the deal, but no additional value was created during the process.

Therein lies the problem with haggling — no value is created. This is important when you’re engaged in a long-term relationship wherein someone feeling as though they lost would be detrimental to its longevity. It’s also important to recognize the potential negative impacts when you’re involved in a strategic acquisition of something and there are multiple, complex variables at play. Focusing solely on one variable can crush the value of the entire deal.

However, haggling does have its place. In many countries, haggling is culturally acceptable and, in fact, expected. You may have to haggle before you can negotiate any other variables. Haggling can also help build momentum in a deal. Haggling over a small item and coming to an agreement may help facilitate movement of larger items. It can also help to expedite the entire negotiation process by quickly getting to a resolution on an inconsequential variable.

Now, back to the loveseat . . . My dad’s explanation of the haggle is what you’d might expect from any such story. The guy he bought it from wanted a lot more than $5. My dad was jovial, made a persuasive argument, and offered less. The other guy refused the offer but made a counteroffer, and they went back and forth until, at last, they agreed on $5. Make no mistake: My dad will recount that story every time someone applies their posterior to that leather loveseat recliner. And that retelling is worth far more to him than the $5 he paid.

Getting trapped in a haggle can destroy value, and it’s an easy trap to fall into. We can help you avoid the snares set by a haggler and guide you through creating value. We’ll assist you with getting better deals, saving time, creating value for all involved, not to mention preserving and even strengthening relationships. Let us partner you with one of our coaches, ensuring that you’re never alone on any deal.