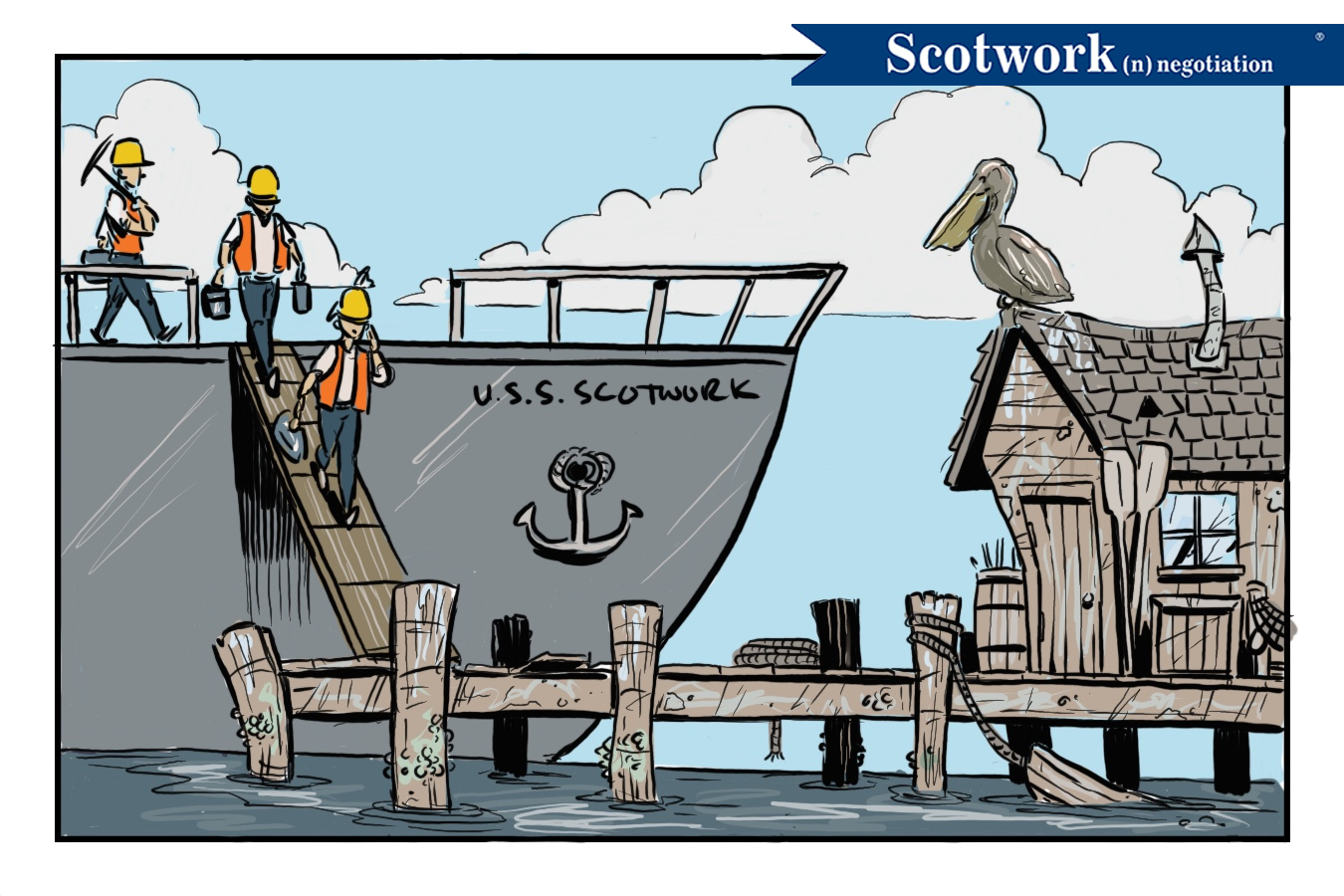 To be honest, I consider myself only an occasional sailor and fisherman. But I really like being around boats and the water, and I’ve been sailing for over 40 years. In fact, it runs in my family. The Waldrops built a sailboat marina in Jordan Creek, North Carolina back in 1974. And when I say “built,” I mean we physically built it — my father, my brother, and me. We cut the trees, we skinned the trees, we treated the poles, we built the pile driver, and we drove the piles. So, yes, that marina means a great deal to me.

In 1990, my father sold the marina and the family kept some adjoining property, which has a house on it, so we’re still there a lot. This has given us a ringside seat to an unfortunate set of circumstances, as we’ve recently watched the marina fall into a state of disrepair. After two hurricanes in three years, pieces of the pier broke off and floated away. It was like watching pieces of my own family history washing away. Nowadays, it’s not an inviting place to keep a sailboat.

Fact is, it’s not a very inviting place for members of my own yacht club, the River Rat Yacht Club, which uses the marina and its building as its clubhouse. We’ve actually begun to lose members, who have other options available to them at better-maintained facilities. The club is 40 years old, and it’s a big part of the local river community, so I really felt the need to step in and do everything I could to restore one piece of history in order to keep another going.

Before I get into what I did, I should tell you a little more about the current owner, a doctor who lives about 50 miles away, and his relationship with the yacht club. Based on a brief conversation I had with him a few months back, it occurred to me that he felt he was spending a lot of time and money on marina upkeep, and the club wasn’t giving him much in return. In fact, he added, some people seemed to take use of the clubhouse — which, to be fair, had been unofficial up to that point — for granted. This may be the reason why he’d been dragging his feet in terms of repairs.

That’s when it occurred to me that I might be able to put my 19 years of negotiating experience to good use by reworking the equation — creating an official quid pro quo between the yacht club and the marina’s owner. In a nutshell, we’d have the yacht club formally take over most of the marina’s maintenance and operations responsibility in exchange for official use of the clubhouse and partial use of slip rental proceeds to help with marina maintenance.

Circling back with our club’s commodore, I was able to put together a list containing what we wanted the owner to do, followed by a list of what we’d do for the owner. Those lists allowed us to focus our thinking through the various issues and group all of them into just those two areas. Once we had them grouped, we were able to talk through a more organized proposal, which included having all slip rental payments sent to the RRYC for deposit in the owner’s account. Of that amount, we would take 33% for a maintenance account, which we would oversee. This would ensure that the owner had limited responsibility while receiving all of his money. In return, the club would give 50% of our existing funds toward immediate pier repair.

This approach has given us a framework to bring to the yacht club at our annual meeting in March, which will allow us, potentially, to bring it to the owner immediately afterwards. I genuinely believe that it’ll solve both parties’ problems — and it will strengthen the relationship between the club and the owner so that both sides feel they’re moving towards a common goal of increased rental income for the owner and a more vibrant yacht club for the membership.

How will it go? Well, that remains to be seen, but I’m optimistic. Stay tuned for Part 2, where I’ll let you in on the results . . .

You don’t have to stand by and watch something important to you fall apart and wash away. We can be there to help you repair what’s broken and guide you as you bring it back to life. We’ll assist you with getting better deals, saving time, creating value for all involved, not to mention preserving and even strengthening relationships. Let us partner you with one of our coaches, ensuring that you’re never alone on any deal.