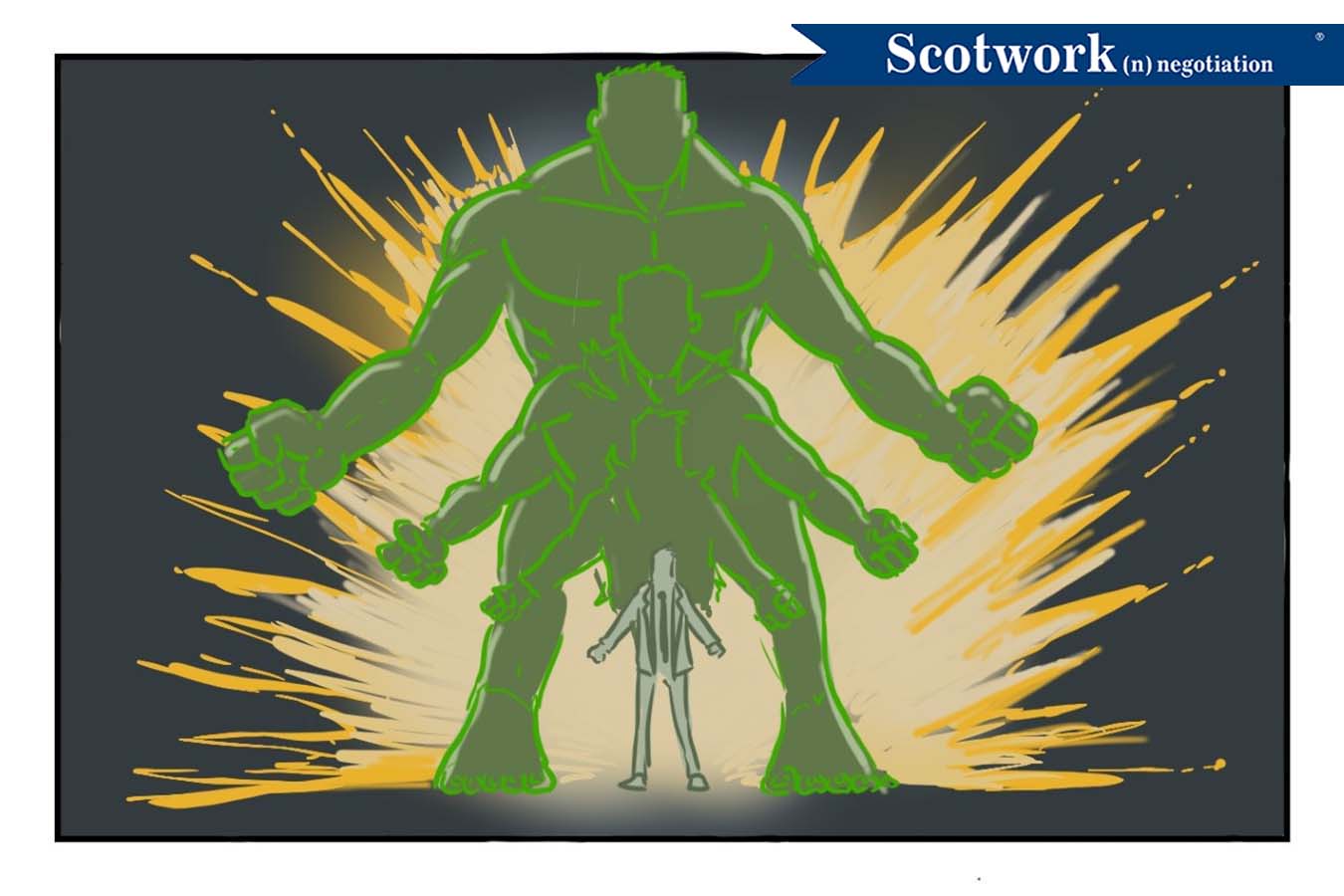 I can’t wait for the New Year to tell you all about a personal negotiation I was just in that sent my blood boiling! The deal isn’t completely done yet, so I don’t want to jinx it. (In case you’re wondering, no, I’m not superstitious — that would be bad luck.) However, in this deal, something happened that triggered an immediate and angry response. I bring it up because even as a highly trained and experienced negotiator, my emotion was getting the better of me. That is, until I did the following . . .

As I said, I’ll get into deal specifics in the New Year, once the dust has settled. But I wanted to highlight the anger piece because anger is a powerful emotion that can get in our way during a negotiation. Anger is a natural adaptive response to threats. It can produce powerful feelings and behaviors that allow us to defend ourselves against those threats. That means a certain amount of anger is healthy and needed for our own preservation. However, there’s a tipping point at which anger becomes destructive to our situation.

Typically, when anger appears, we use a combination of conscious and unconscious methods to resolve it. Psychologists identify three primary types of approaches: expressing, suppression, and calming.

Expressing anger can be done verbally or physically. Expressing your anger in an assertive but non-aggressive manner is usually a healthier approach than screaming or pounding your fist on the table.

Suppression is about holding it in or ignoring it. While doing so may bring peace to a situation, it can also produce side effects, such as passive-aggressive behavior and even high blood pressure.

Calming is about how you control both your external behavior and internal responses. It’s about recognizing when you’re angry, putting the situation into perspective, and then changing the way you think about or process it. For a negotiator, this is the state we want to be in when anger appears.

In my situation, the other party did something that immediately triggered a verbal and physical reaction. First, my tone changed. My responses became terse. Physically, my brow furrowed, my jaw clenched, and my heart raced. I could feel all of it, but I couldn’t control it because I was so focused on what caused the reaction. Then, something happened: At the moment I was searching for the profanity with which to blast the other side, my body took over, and I took a deep breath. It was an unconscious reaction that would pay dividends.

As I drew the deep breath, I realized that my breathing had been shallow — an indicator of anger. I started to recognize all the other physical signs of anger and immediately paused to take inventory. While my initial reaction was that “everything that could go wrong is going wrong!” I remembered something a mentor told me years ago. He said, “No matter how frustrating something might seem, it’s never as bad as you think it is.” That’s when I  started changing my thinking about the situation (a technique called cognitive restructuring).

I started to assess the “threat” more clearly. Instead of responding with inflammatory statements, I began asking questions to better understand what was said and why it was said. I calmly expressed my disappointment and started structuring their expectations by saying something like, “This is not what I expected. I’m going to need some time to process this before I respond.”

Then, I did just that: I took a break to process and calm down. I kept breathing, but I also turned my focus from “how this is bad for me” to “how can I make this work for me?” I began writing down what I needed to make this situation better as well as what they probably needed/wanted to make this situation better. Then, I focused on how I was going to approach the next conversation. I even practiced it with someone else to make sure I was comfortable and in control of my words and emotions.

When I got back together with the other side, I found that taking the break, calming myself down, and putting together a plan proved super helpful in terms of how we came to a resolution. More importantly, the experience reminded me of what to do when my anger is triggered:

Look out for a future post in which I’ll fill you in on the details of the deal. (In the meantime, knock on wood, please!)

We Can Help You Deal With Anger at the Negotiating Table.
Anger is a powerful emotion that can get in your way during negotiations. The key is recognizing when you’re angry, putting the situation into perspective, and then changing the way you think about or process it. We can help! Drawing on nearly 50 years of real-world negotiating experience, we’ll assist you with getting better deals, saving time, and creating value for all involved — not to mention preserving and even strengthening relationships. Let us partner you with one of our advisers, ensuring that you’ve got the broadest view of your deal.

Brian Buck
More by Brian Buck:
Busted Bracket!
Tactics I Love to Hate
Back to Insights