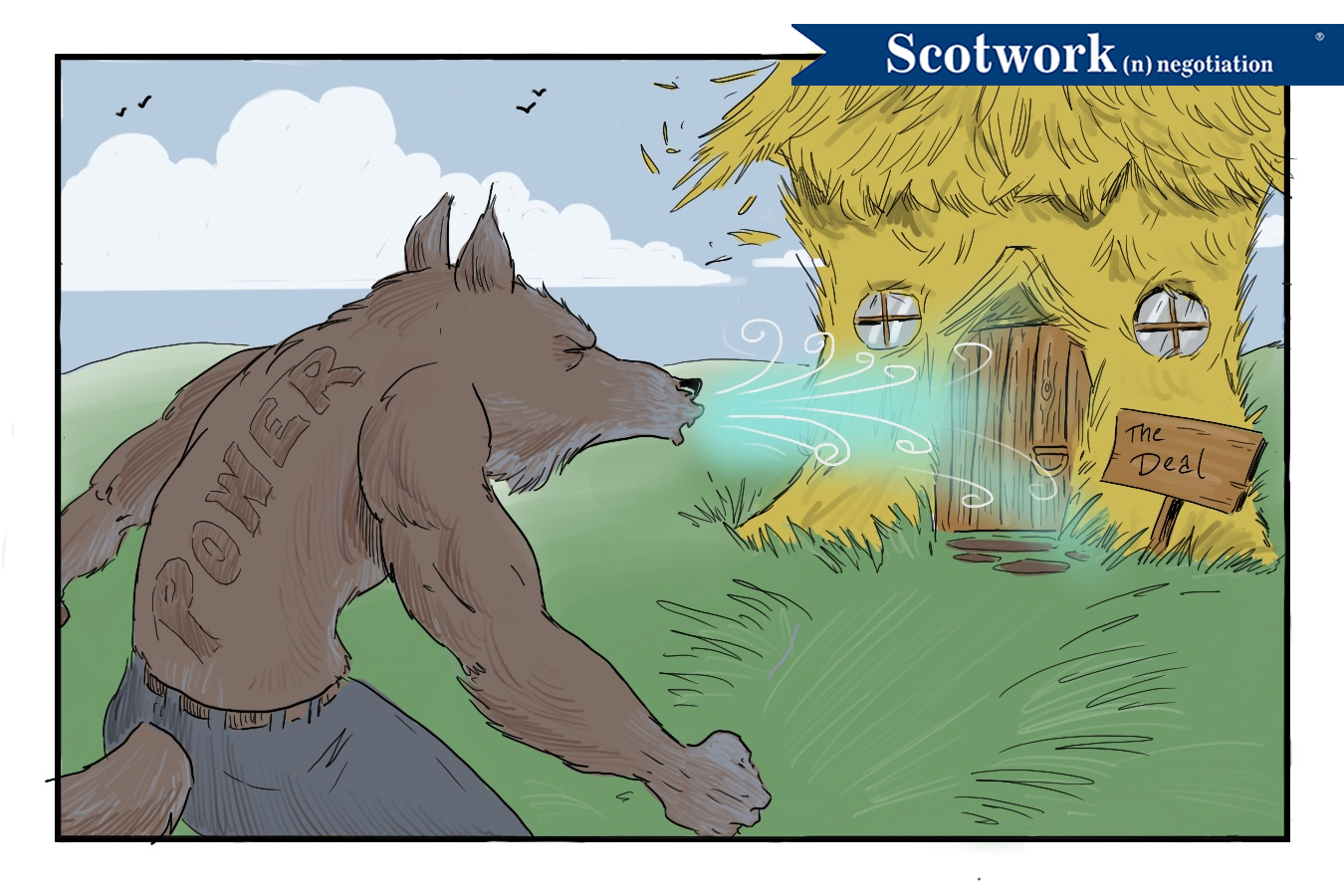 My past week can pretty much be summed up in two words: no power! Literally. I live in Southern California, and for almost a week straight we had winds blowing between 30 and 60 mph. I know that many of you who live in hurricane country or Tornado Alley will scoff at those winds. But for us, high winds combined with high heat and low humidity means devastating brush fires. As a result, our electric company proactively shut down our power in order to prevent said brush fires. The problem was that they provided us with limited warning and inaccurate power-on expectations — at a time when we’re all working remotely. We need power! Don’t we all?

We talk a lot about power in a negotiation because it’s the very currency of a negotiation. Power can dictate the outcome of a deal. If you wield a lot of it, you can get more of what you want; if you have little of it, you’re more at the mercy of the other party. But as I experienced this past week, power is fluid and when dynamics change so does power.

Here’s a little backstory about my electrical situation: I don’t have a whole house generator or a Tesla Powerwall that would keep my house running in the event of a power outage. I do have solar, but it stops working when the power goes out (as odd as that sounds). So, when the power is on, I actually have more power with the electric company, because I can either produce my own electricity via solar or I can buy electricity from the electric company. That gives me some leverage. Even if I can’t negotiate my rates with the electric company, I can decide how much I’m buying from them and when, which means I control my spend. That puts me in the driver’s seat. Of course, with solar I could potentially build a big enough grid to be completely off the electrical grid, which increases my power. (This is all predicated on the electric company actually caring about keeping me as a customer. And let’s face it, I’m just one in a few million for them. But for the purposes of this example, that’s not the point.)

Now, at the same location with all the same tools, when the power company shuts off my electricity, I lose all of my power — literally and figuratively. I can no longer produce or consume electricity. I’m literally at their mercy. This is where we can illustrate the fluidity of power.

In my scenario, let’s assume that the electric company does actually care about selling me power. Then the longer that I can survive without their electricity, the more pressure it puts on them to turn my power back on and turn me back into a paying customer. Therefore, their leverage over me will dissipate with time.

The variable itself didn’t change, but the need for it changed over time. In this example, we used time to influence power. If you’re in a situation where you have little power, speed can disrupt the leverage someone has over you. For example, if you know that the other side has a deadline they’re trying to meet, waiting to do a deal until closer to the deadline may make the other side more flexible (think: buying a car at the end of a month or year, when dealers tend to be more flexible). Understanding how to influence the need can be a source of power.

This is an example of changing variables. I literally took one variable off the table and replaced it with something else. When a variable no longer exists, it can’t be leveraged. In a negotiation, if you have the ability to change variables when they are over-leveraged, this can alter the power balance as well.

Lastly, adding variables to a negotiation can be a source of power. Right after the electricity went out at my home, I knew I was in trouble, as I didn’t have the right tools to deal with this outage, which put me at the mercy of the electric company. So, I ordered a couple of Tesla Powerwalls, which will act like battery backups to my house. That way, the next time the electric company turns my power off, I won’t be without power. By adding a new variable to the mix, I’ve regained power.

While this week was a little nutty with all of the unpredictability and moving around, it turned out well in the end. We got out of the house, enjoyed some room service, upgraded our power infrastructure, and I got a nice reminder of how to influence power. As the power shifts during your negotiations, look to influence the variables, change the variables, or add new variables to tilt the power in your favor.

We Can Help You to Tilt Power in Your Favor.

Since power can dictate the outcome of a deal, ask yourself this: Are you in a position of power in your negotiations? If not, we can help! Drawing on 45 years of real-world negotiating experience, we’ll assist you with getting better deals, saving time, and creating value for all involved — not to mention preserving and even strengthening relationships. Let us partner you with one of our advisers, ensuring that you’ve got the broadest view of your deal.

Brian Buck
More by Brian Buck:
Be My Valentine?
Garage Sale Negotiations
Back to Insights