You’ve Been Lied To 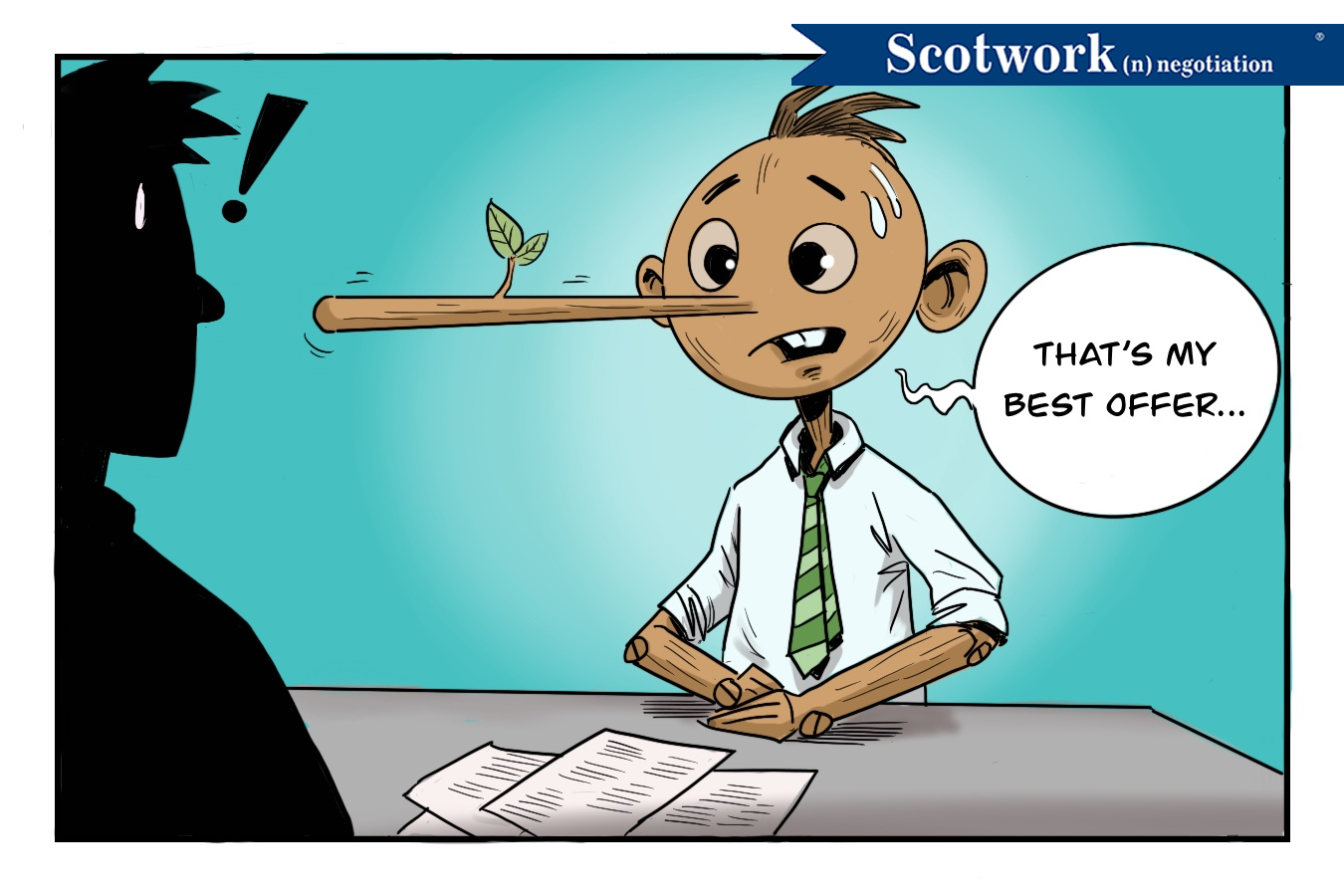 Sorry, but it’s true — you’ve been lied to and, apparently, you’re not alone. In our annual Buyer/Seller Survey we asked, “How often do you feel the other party lies to influence the perception of power?” 81% of respondents replied that the other side lies more often than not. Wow! That’s a lot of people who believe they’re being lied to. Here’s the kicker: We also asked, “How often do you lie to influence the perception of power?” 85% replied rarely or never! Who’s lying here? Apparently everyone is. Suffice it to say, ethics are frequently lacking at the negotiating table. The first step to dealing with such deception is to recognize it.

Each of us has a unique moral compass and draws the line between right and wrong in a different place. It’s not uncommon for people to try to manipulate their own power at the negotiating table, and it can have a profound influence on outcomes.

Let’s be honest (no, really): Lying can be tempting. It can help you appear to have more leverage than you really do. It can paint a reality that doesn’t actually exist. It can create perceptions that can help your position.

The downside to lying is obvious. Those who choose to lie or be unethical open themselves up to a reality that can’t be changed once they’re found out. Once they’ve been exposed, their credibility is eroded, if not completely destroyed. Their negotiations can stall or even come to an end. Such a discovery may actually embolden the other side to seek payback.

With lying being so prevalent, you need to be able to identify lies quickly, so that you can thwart them early on and not allow them to undermine your negotiation. The other side might be lying to you if they’re . . .

Evasive. Someone who’s lying may attempt to dodge your questions or respond to them vaguely.

Inconsistent. Lying creates a false narrative that can be difficult to remember. This can lead to inconsistencies in someone’s story.

Changing the subject. In order not to be caught in their own lie, someone who’s lying may change the subject to avoid exposing the truth.

Verbose. Long-winded answers or overly complex stories may be a smoke screen designed to conceal what’s really going on.

Irritated. If someone who’s lying feels uncomfortable, they may become agitated, angry, or aggressive when questioned.

Deflecting. Instead of facing the truth, a person who’s lying may attempt to deflect the focus from themselves to someone or something else.

If you detect a lie, how you respond depends on a number of factors that you must weigh, including how egregious the lie is, its impact on the negotiation, and where you are in the negotiation process. Regardless of whether you call out the other side or play coy, one thing is certain: You have an advantage, because now you can adjust your strategy to deal with the lie and ensure that you’re protected.

We Can Help You Deal With Deception at the Negotiating Table

As we all know, ethics are frequently lacking at the negotiating table. The question is, do you know how to recognize deception, not to mention how to respond to it? We can help! Drawing on 45 years of real-world negotiating experience, we’ll assist you with getting better deals, saving time, and creating value for all involved — not to mention preserving and even strengthening relationships. Let us partner you with one of our advisers, ensuring that you’ve got the broadest view of your deal.

Brian Buck
More by Brian Buck:
Foot In Mouth Disease
Price Isn’t the Only Thing to Negotiate
Back to Insights