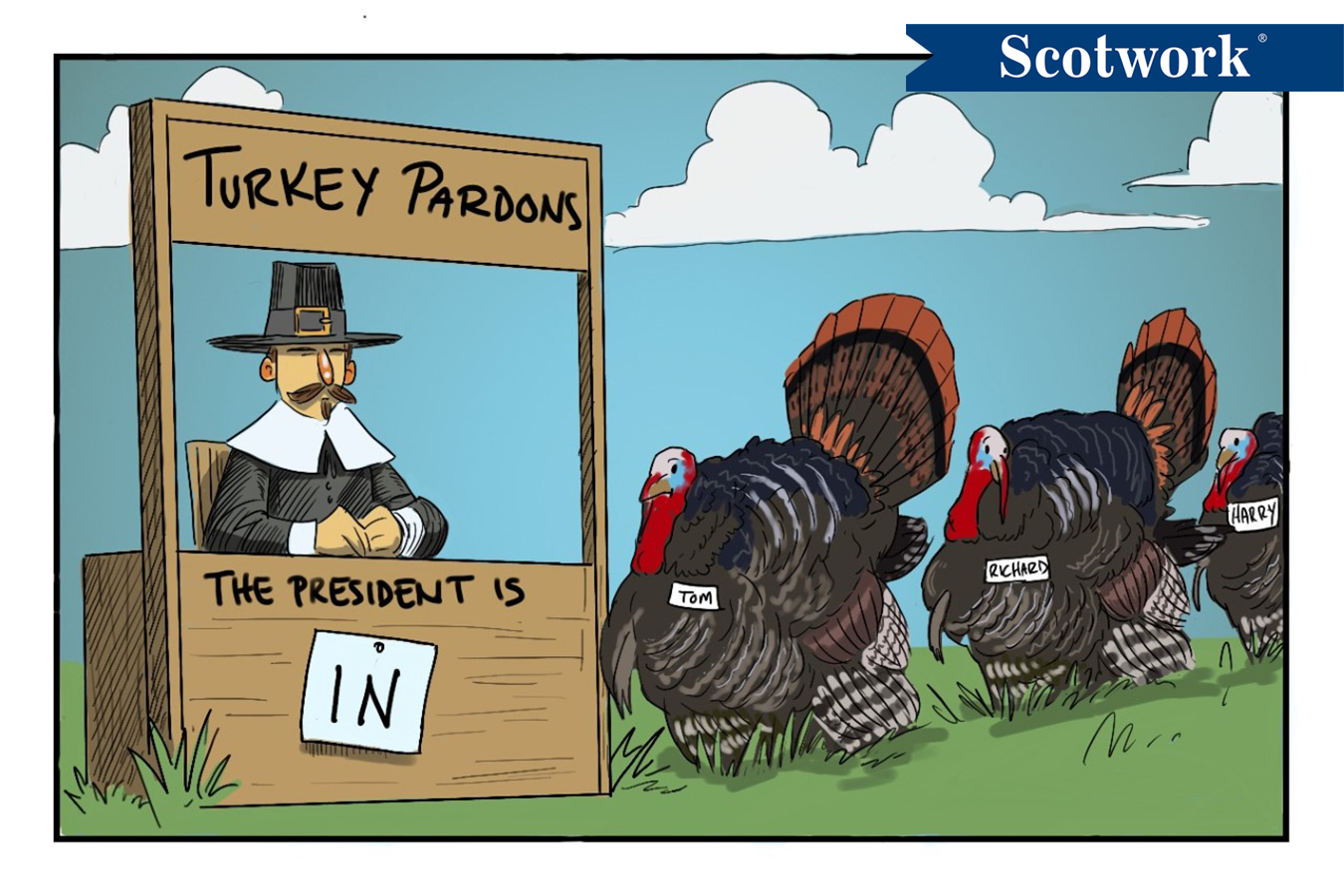 Bartholomew. That’s the name of this year’s turkey. Every year, my daughter names our Thanksgiving turkey in the hope that we won’t eat it. At some point, she realized that the turkey was already dead, so naming it wasn’t going to stop Dad from cooking it, nor was Dad going to feel any guilt as he consumed it. Nonetheless, my turkey has a name.

Truth be told, this whole thing started when my daughter found out about the National Thanksgiving Turkey Presentation. It’s an annual event where the National Turkey Federation presents a live domestic turkey to the President of the United States. As many of you know, the President pardons said turkey, which typically has a colorful name, like Peas and Carrots. What I didn’t know till recently is that this tradition began not too long ago — under our 41st President, George H. W. Bush.

As I researched the story of the pardoned turkey, I grew curious about how this tradition came to be. Seems like it’s existed forever, but it’s actually been around for only about three decades (or, since we’re talking turkey, three domestic-turkey lifespans). So, how did it begin?

Horace Vose — he’s the guy who set off the turkey wars. Yes, you read that correctly: turkey wars. From 1873 till his death in 1913, Vose, Rhode Island’s Poultry King, presented a dressed turkey to the President. After Vose’s passing, it was open season on who’d become the exclusive provider of turkeys to the White House. And every year, the White House was inundated with turkeys.

It all came to a head shortly after WWII, when President Truman strongly advocated conserving grain for foreign aid, promoting “meatless Tuesdays” and “poultryless Thursdays.” In 1947, lobbyists from the Poultry and Egg National Board stepped in to call a ceasefire in the war on poultry. Leveraging the fact that Thanksgiving, Christmas, and New Year’s Day fell on Thursdays that year, they successfully put an end to “poultryless Thursdays,” allowing the Thanksgiving Turkey its rightful place on the dinner table. Once again, the White House was inundated.

Prior to the ’70s, the birds were typically eaten (not a good time to be a White House turkey). From the ’70s to the early ’90s, most of the turkeys presented were spared. In 1989, Bush became the first President to issue a pardon to the gifted turkey — and every President since has done the same. At the initial ceremony, Bush said, “But let me assure you, and this fine tom turkey, that he will not end up on anyone’s dinner table. Not this guy. He’s presented a Presidential pardon as of right now, and allow him to live out his days on a children’s farm not far from here.”

What does any of this (or Bartholomew, my turkey) have to do with negotiating? In every negotiation, traditions are at play. Some are good, others not so good. We often do the things we do because the people before us did them, and the people before them did them, and so on. Past behavior is the momentum driving future behavior. It’s smart to stop and ask ourselves, “How did we get here?” If we don’t, we set ourselves up to repeat sins of the past. Doing so, however, also allows us to celebrate and give thanks to those who’ve made a positive impact.

This Thanksgiving, I hope you have an opportunity to get away from the negotiating table and spend time with your friends and family. Give thanks to those who’ve brought the best out of you and try pardoning the turkeys that have made a less-than-positive impact. Who knows — maybe a small pardon is all they need to be thankful this holiday season, too.

We Can Help Your Team Avoid the Sins of Past Negotiations.
Traditions are at play in every negotiation — and they drive future behavior. Can your team differentiate good traditions from bad? If not, they might be setting themselves up to repeat the sins of past negotiations. We can help! Drawing on nearly 50 years of real-world negotiating experience, we’ll assist you with getting better deals, saving time, and creating value for all involved — not to mention preserving and even strengthening relationships. Let us partner you with one of our advisers, ensuring that you’ve got the broadest view of your deal.

Brian Buck
More by Brian Buck:
President Trump vs. Harley-Davidson
Fight or Flight?
Back to Insights