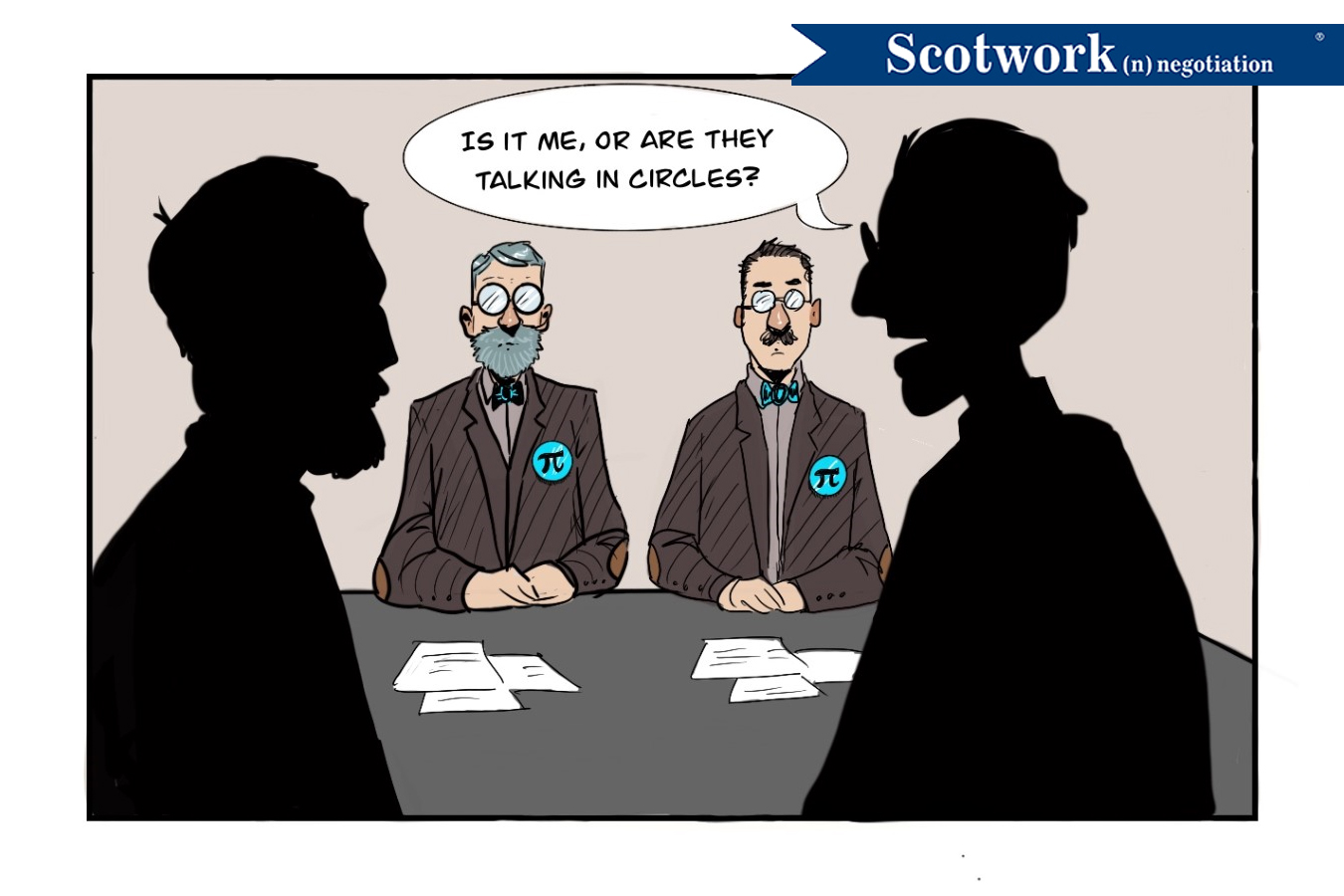 What do you get when you cross a math geek, an amateur chef, and a professional negotiator? Someone obsessed with pi and pie! March 14 (or 3.14) is Pi Day, often celebrated with pie. As a math geek, I celebrate π, which is the ratio of the circumference of any circle to the diameter of that circle (I know, pretty cool). As an amateur chef, I started making pies as an act of revolt at a Thanksgiving I was attending where no pie was to be served. As a professional negotiator, I’m constantly talking to people about their share of the pie at the negotiating table. To honor pi/pie, let’s talk about each — and how they can potentially help you get a better deal.

Let’s talk pi. Take a compass and draw a circle. Now, take some string and go exactly one time around the circle. Then, measure the length of that string. That’s called the circumference. If you measure a straight line from the center of that circle to any point on the circle, that’s called the diameter. If you divide the circumference by the diameter (circumference/diameter), that will equal pi. Get this: Pi is the same number no matter how big or small the circle! That’s what makes it so special. In addition, pi is an irrational number, which means the decimal portion of the number never ends or repeats itself. Pi has been calculated to about 62.8 trillion digits!

So, what does that have to do with negotiation? In any negotiation, predictable correlations will exist. Much like circumference and diameter are to pi, so are many links in a negotiation. For example, the movement someone makes from an opening offer to the final offer, or the emotional reaction to negative information, or the demands made at the close of a deal: A skilled negotiator will perceive and analyze these correlations so they can better predict outcomes and plan accordingly.

Let’s talk pie. Before our house became an annual Thanksgiving gathering destination, the holiday would rotate among extended family members. The Wednesday before one such Thanksgiving, I discovered that the dinner menu was to culminate with a beetroot pumpkin soufflé, which sounded neither appealing nor Thanksgiving-like. I felt strongly that pie had to be part of the occasion. So, I went to my local Williams-Sonoma store and asked, “How do I make a pie?” Fortunately for me, working that night were some incredible pie experts, who shared their pie-making secrets. They armed me with all the latest tools I’d need, and one of them, who could’ve been my grandmother, gave me her number so that I could call her if I got stuck. Rather than making another pumpkin dessert, I baked an apple pie that was amazing and is still part of our Thanksgiving dinner today.

So, how can my apple pie help at the negotiating table? Experience and teamwork matter in a negotiation. When most professionals negotiate, no matter how senior they might be, they do so with narrow experience because they’re typically limited to their industry, the parties they negotiate with, and their own experiences. This means that some situations may seem very complex, but for someone else who has a different set of experiences, they may not. There’s great benefit to working with others who have a broader point of view. Their perspective can inspire creativity, different approaches, and a more robust strategy at the negotiating table.

Let’s talk share of the pie. We frequently hear people talk about wanting to create win-win outcomes at the negotiating table. There’s nothing wrong with this goal, unless you interpret “win-win” as your share of the pie being equal to the other party’s. The negotiator’s goal is to create an outcome that all parties can support. That does not mean everyone has equal value. In fact, focusing on equal value can be detrimental to closing a deal. It’s very possible that one party will accept less or give more in order to create an agreement that everyone is willing to put into play. That doesn’t mean one party won and the other lost; in fact, both parties win only when there’s a mutually acceptable outcome. That’s a win-win.

There you have it: pi or pie to the rescue! If this post doesn’t have you hungry for pie or curious about pi, then I hope it inspired some thought in terms of helping you get your share of the pie at the negotiating table. Happy Pi Day!

We Can Help You Get Your Slice of Pie at the Negotiating Table.
Are you failing to perceive and analyze your deal’s many correlations, which can help you better predict outcomes and plan accordingly? Are you missing the benefits of collaborating with others whose perspectives can inspire creativity, different approaches, and a more robust strategy? Are you focused on gaining equal value at the expense of actually achieving a mutually beneficial outcome? We can help! Drawing on nearly 50 years of real-world negotiating experience, we’ll assist you with getting better deals, saving time, and creating value for all involved — not to mention preserving and even strengthening relationships. Let us partner you with one of our advisers, ensuring that you’ve got the broadest view of your deal.

Brian Buck
More by Brian Buck:
Is It Taboo to Talk Politics?
The Negotiator’s Bill of Rights
Back to Insights