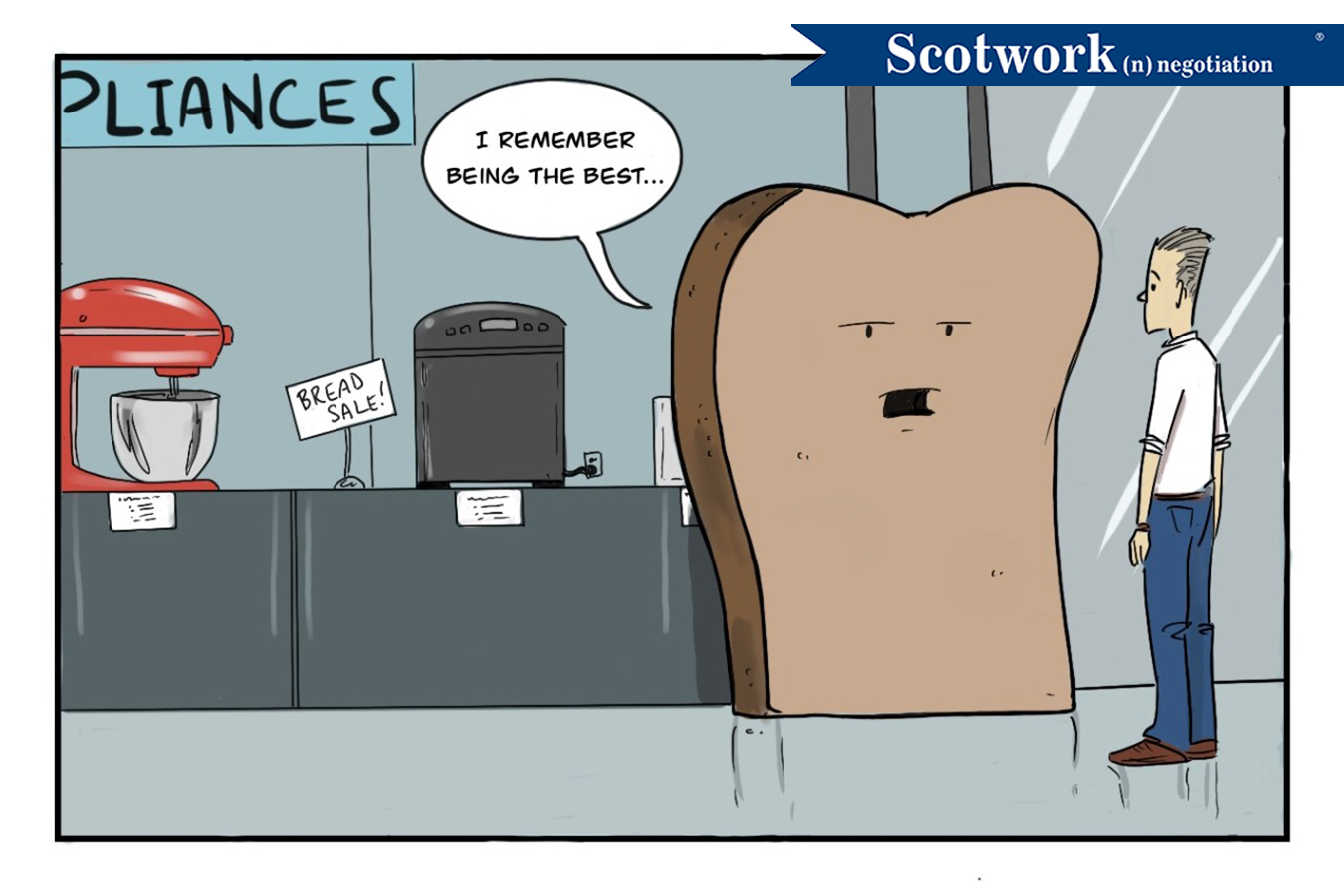 Lessons in negotiating can happen anywhere. Recently, I had a lesson that took place at Williams-Sonoma. As we shopped for kitchen supplies, I noticed that one appliance was clearly missing — the bread maker. Yes, a staple of wedding gifts and housewarming events everywhere was conspicuously absent from the store. Which is ironic, seeing as Williams-Sonoma was the driving force behind the, er, rise of bread makers. How they accomplished that is a great lesson for all negotiators.

In the ’90s, Williams-Sonoma was the first to bring a bread maker to market. After much consumer research, they discovered that people really enjoy freshly baked bread, but they were too intimidated to bake it themselves. However, if there were a machine that required home-bakers to simply add water and some ingredients, and it would do the rest — now, that would be a big hit.

They launched the first bread maker with a price point of nearly $300. Then, as Williams-Sonoma does, they put bread makers on display while their in-store kitchens baked loaves of the stuff for every shopper to smell and sample — typically, a winning formula for the retailer. Surprisingly, initial sales were tepid at best, which was a huge disappointment. This product was precisely what consumers wanted, but no one was buying it.

What do you do when something isn’t selling? You make it bigger and sell it for more! (What, were you expecting “cut the price”?) Williams-Sonoma called a market research group whose recommendation was to do absolutely nothing with the existing product. Rather, they should make a bigger one with a few more features and a heftier price tag.

The “bigger and better” strategy worked. Sales went through the roof! But not for the new premium machine — sales soared for the original $300 model. And that’s how it rose to appliance stardom.

What was the problem? Why did “bigger and better” work?

The first problem was that no one was familiar with the bread-making process. They had no idea what it took to bake a loaf, so when the original machine offered freshly baked bread with ease and simplicity, the only thing consumers could compare it to was a $2 to $5 loaf of bread. Why would anyone spend $300 when they can get bread sliced and ready to eat for 1% of the cost? That was the customer’s reference point.

“Bigger and better” worked because Williams-Sonoma gave a different reference point. Now, consumers were looking at a $300 product versus a nearly $800 product. They forgot all about the loaf of bread in the grocery store. The reference point and comparison shifted. When people saw that they could buy a very nice bread maker for a fraction of the cost of a “bigger and better” appliance, it was a no-brainer.

Why is this a lesson for a negotiator?

There are two concepts at play here: anchoring and framing.

The bread-making market was anchored by a $2 to $5 loaf of bread. That’s what consumers were used to, and that’s all they knew. They were anchored to this position. Once someone is anchored to a position, it’s hard to move them.

Skilled negotiators recognize this and use it to their advantage. They’ll anchor negotiations by making the first proposal. That anchor usually gets secured toward their most favorable position. Once it is, the other side must work hard to move the position from the anchor. It’s one of the reasons why I almost never ask the other side to “make me an offer” — I know that if I do, they will anchor the negotiation toward their most favorable position, leaving me with all the work to move it.

Skilled negotiators use framing to position proposals, opinions, and other information in a manner that creates a comparison or viewpoint that’s more favorable to their desired outcomes. We will react differently to situations based on how information is presented to us. If you understand the needs, motives, priorities, and constraints of the other party, you can frame things in a manner that’s more favorable to you.

It seems the bread maker has given way to other “must have” appliances. Still, besides all the great freshly baked bread it gave us, it offered us some great lessons in negotiating as well.

We Can Help Your Team Use Anchoring and Framing to Their Advantage.
Are your dealmakers anchoring negotiations to their most favorable position by making the first proposal? Are they framing their proposals, opinions, and other information in a manner that creates comparisons and viewpoints that are favorable to their desired outcomes? We can help! Drawing on nearly 50 years of real-world negotiating experience, we’ll assist you with getting better deals, saving time, and creating value for all involved — not to mention preserving and even strengthening relationships. Let us partner you with one of our advisers, ensuring that you’ve got the broadest view of your deal.