Negotiating With the PTA 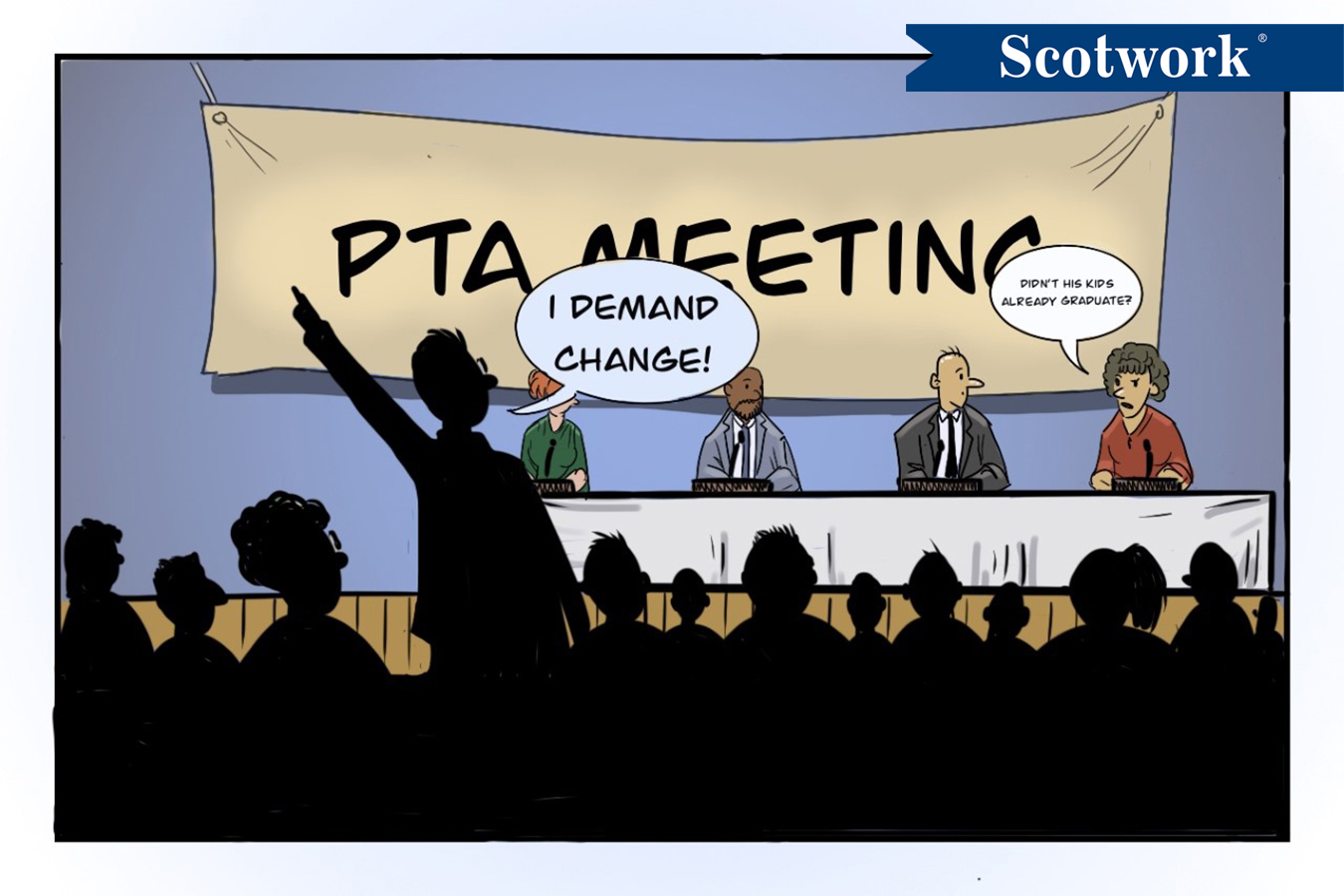 Summer is over, and the kids are back to school! Signs of the new school year are all around: Back-to-school sales at retail stores have ended, school buses are in traffic as people drive to work . . . and interactions in a new school community can provide opportunities for unanticipated negotiations.

I went back to school, as well, since the new PTA members for my kids’ grade school met for the first time a few weeks ago. It’s a good group of people giving their time and energy to help the school. It’s my first year working with the organization, so I spoke when answers seemed obvious. “Should we raise money for field trips?” was easy to support.

I was less sure, however, when the question was, “How should we raise money for field trips?” The other parents quickly identified me as inexperienced in the ways of the PTA, and they stopped specifically requesting my opinion. I’m still unsure about some of the questions we considered, like “Should we have a talent show?” Ours is a school for children aged between five and 11 without special training in the performing arts, so the answer doesn’t seem like an obvious “yes” to me, although it does to some parents.

I decided to contribute by paying attention and learning how the organization works. The experienced team members moved deftly through a big agenda, but their progress suddenly slowed.

“We can’t use our social media accounts. The person in charge of them from last year hasn’t given us the credentials," a PTA officer said.

“What?” another person asked. “Does he know we need them?”

As the committee discussed the facts, it came out that the person previously in charge of social media knew he was supposed to turn over the credentials but hadn’t. The only clue the person with the credentials shared was that he wanted “to collaborate” on the PTA social posts even though his child had graduated.

Team members proposed different ways to address the issue. People were frustrated at what appeared to be an unreasonable request, and tempers started to rise.

“We go to the social media platforms. Maybe Instagram helps us out.”

“Do we create all-new social accounts if that doesn't work?”

“Go over this person’s head. Who’s his employer? Let’s talk to his boss and see if that makes him give us the credentials.”

I realized that I might have something to contribute. “Hey, team,” I started. “Since this person says he wants to ‘collaborate,’ I think we can negotiate with him.” The group was quiet for a moment. I needed to make my case clear and concise if I wanted to be taken seriously in future meetings. I took a breath and presented my thoughts.

“He’s got something we want, which is the credentials. We apparently have something he wants, since he’s interested in collaboration. That’s enough to create the basis for a negotiation. He’s also signaling what would be worthwhile for him to start talks.”

The PTA officers considered this for a moment. The core team was familiar with how to work together; they communicated effectively just by making a few hand gestures to one another and raising their eyebrows in response. I wondered if it would ever be possible to be an insider with this group. The President broke the silent communication with her team and spoke to me.

“You’re suggesting we negotiate with this person instead of trying these other approaches. Is that right?” she asked.

“Do you think it will work?”

“We won’t know until we try,” I answered. “I can tell you that I’ve experienced remarkable results from negotiation, even when an easy resolution wasn’t apparent.”

The PTA President considered this for a moment, then spoke again.

“OK,” she said. “We’ll try it. You’ll be in charge of the negotiation, and you have to get results in time for us to announce the first fundraiser, or we’ll have to try something else. I’ll get you the phone number you need to get this started. Next order of business . . .”

When my first PTA meeting ended, I felt like I had bitten off a lot, and I hoped it wasn’t more than I could chew.

Here are my takeaways since I went back to school for my first PTA meeting:

- The opportunities to use negotiation to make things happen are everywhere if you can notice them.

- Proposing a solution at a school meeting is often the same as volunteering to handle the whole problem.

- I’m still unsure if we should have a talent show, but it looks like it’s happening, so I’m throwing my support behind it.

The PTA got their social media credentials back. The first fundraiser, a dine-out at a local restaurant, was announced on Instagram and garnered a respectable number of likes. We’re hoping for a big night.

We Can Help Your Team Perceive the Value of Negotiating.
If your team is not looking to increase value, they’re leaving money on the table. Investing in their negotiation skills may be just what they need. We can help! Drawing on nearly 50 years of real-world negotiating experience, we’ll assist you with getting better deals, saving time, and creating value for all involved — not to mention preserving and even strengthening relationships. Let us partner you with one of our advisers, ensuring that you’ve got the broadest view of your deal.

Trevor Murphy
Back to Insights