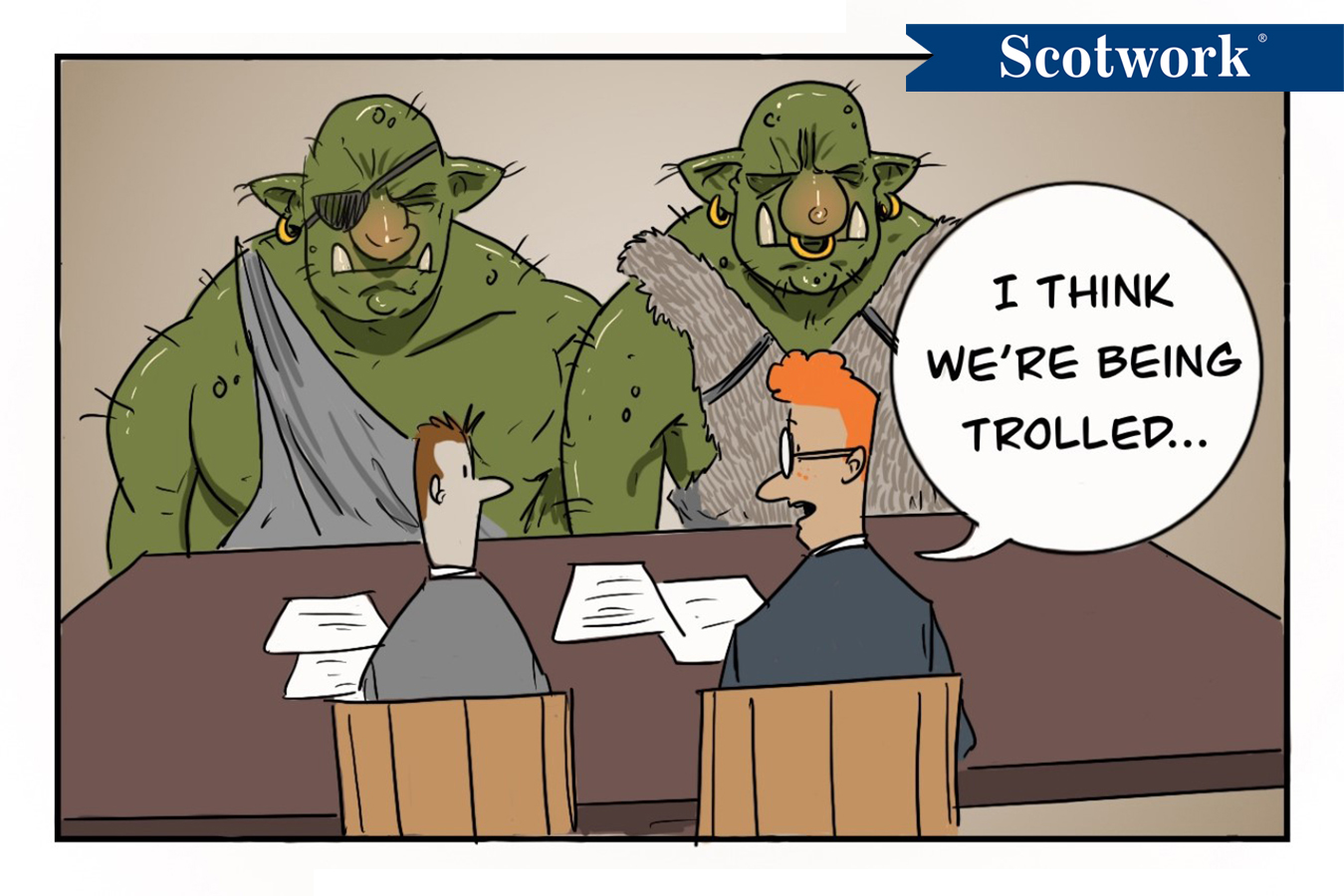 I may have witnessed one of Halloween’s scariest moments — on Twitter. I think I saw Stephen King — yes, the King of Horror — trolling Elon Musk, the social media platform’s new owner. OK, maybe it wasn’t scary and maybe it wasn’t trolling, but it was such an odd exchange that I had to laugh. It also got me thinking: What happens if you get trolled while negotiating?

Here’s the exchange between King and Musk:

@StephenKing wrote, “$20 a month to keep my blue check? [Expletive] that, they should pay me. If that gets instituted, I’m gone like Enron.”

@elonmusk replied, “We need to pay the bills somehow! Twitter cannot rely entirely on advertisers. How about $8?”

Lots of changes are going on at Twitter at the moment. I’m sure there’ll be plenty of internal and external negotiating, and I’m sure some exchanges will get emotional and lead people to react in interesting ways, including some version of trolling.

In social media, a troll is someone who deliberately provokes or agitates others. It could be as harmless as poking fun at something. Then again, it can take the form of malicious attacks or cyberbullying.

In negotiations, trolling is similar. It’s really about irritants that are intended to throw you off your game and get you to make poor decisions. Popular negotiation troll tactics include:

Funhousing the furniture. They may surround the table with wobbly chairs or chairs of different heights — something that makes sitting in person uncomfortable.

Leaving their camera off. In a virtual setting, you may feel self-conscious if your camera is turned on while the other side’s camera isn’t.

Turning room temperature up or down. Making a room really cold or hot can put some people on edge.

Pounding their fist on the table. This is a classic intimidation move designed to reinforce a strong belief.

Using sarcasm or flippant responses. These comments can be used to demean someone else’s opinion.

Those are just the most common tactics; there are so many other troll moves. Basically, they’re cheap tricks, and once you see them, you can deal with them. Of course, every situation is different, but here are some approaches to consider when confronted with negotiation trolls:

Ignore it. Granted, this isn’t easy to do when you’re sitting on a wobbly chair in a freezing room with someone pounding their fist on the table. However, if you can recognize what’s happening for what it is — an irritant intended to throw you off your game — it’ll be easier to ignore or at least not let it bother you.

Respond in kind. This one isn’t for the faint of heart, but you could troll back. That might stop the troll in their tracks. However, it also poses a huge risk: You could unintentionally escalate the situation. I would think long and hard before responding in kind, but it remains a (risky) option.

Establish ground rules. If you know you’ll be dealing with a negotiation troll, establish ground rules early. These could include a variety of things that minimize trolling, such as agreeing to meet in a neutral location, bringing others to a meeting, always having a set agenda, and alternating who leads conversations. All of these moves can help contain the troll.

Call it out. When a negotiation troll is misbehaving, call it out — particularly if the other side is starting to act unethically. If they think they’re pulling a fast one on you, they’ll continue until they’re caught. Call out the behavior and let them know you won’t negotiate with them when they’re behaving that way.

Walk away. If the negotiation troll doesn’t behave, you may need to walk away. If you can’t walk away, you might want to consider elevating the matter above the troll’s head or having someone else on your side take over.

Be on the lookout for trolls. See them for what they are, know what they’re trying to do, and deal with them appropriately. One more thing: In response to $20 or $8 or $?? for Twitter, I’d prefer $0, thank you very much.


We Can Help Your Team Deal With Negotiation Trolls.
Is your team dealing with negotiation trolls who use cheap tricks to throw them off their game and get them to make poor decisions? We can help! Drawing on nearly 50 years of real-world negotiating experience, we’ll assist you with getting better deals, saving time, and creating value for all involved — not to mention preserving and even strengthening relationships. Let us partner you with one of our advisers, ensuring that you’ve got the broadest view of your deal.