The Agency of "No" 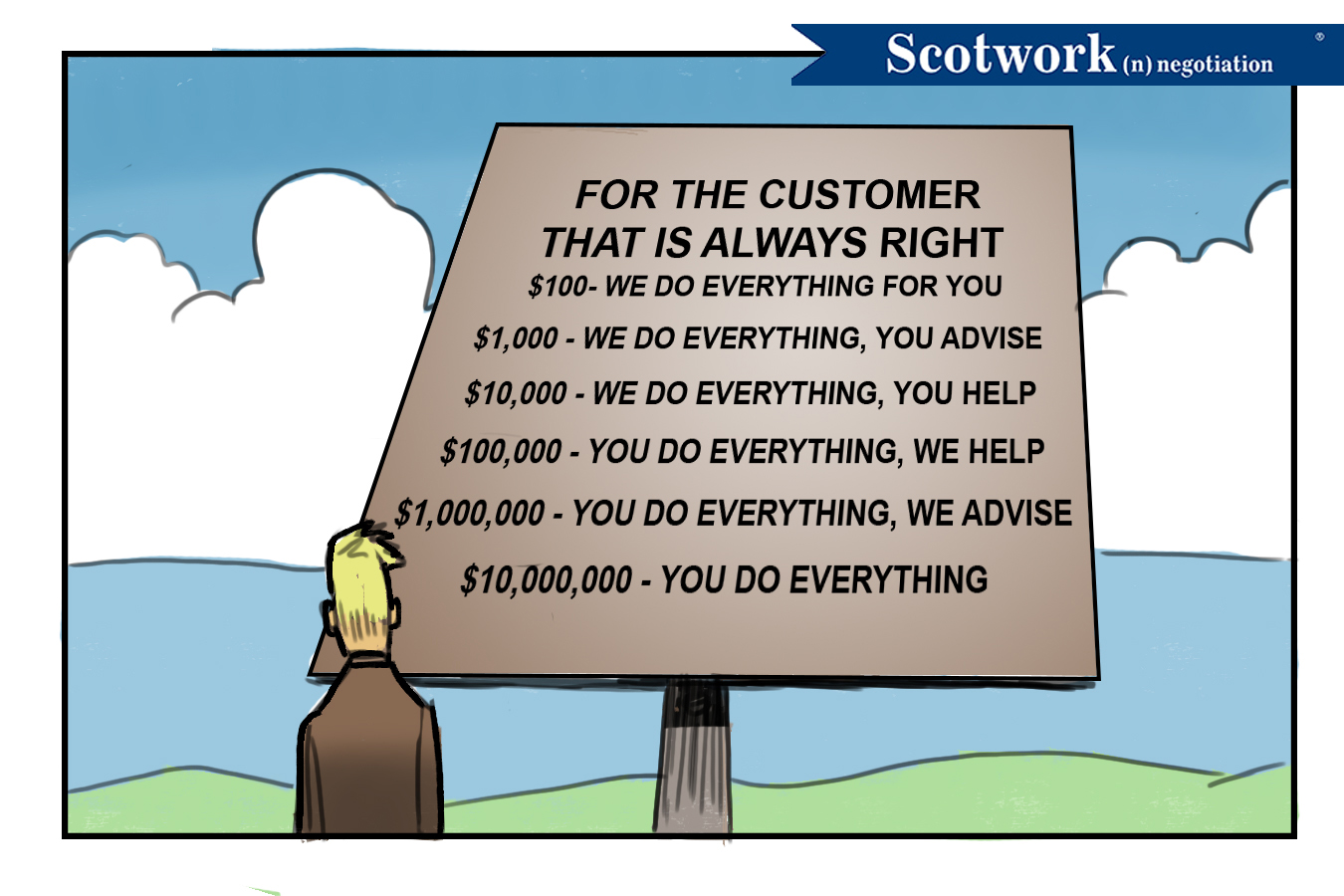 It had been three months since the start of our relationship with our new client. My team had bent over backwards keeping the client happy. Every day the phone rang with a new demand or a new priority. When we got those calls, my team would do their best to convince the client it wasn’t a good idea to change direction so often but eventually, my team would acquiesce and do what the client asked. Everyone believed that’s what we needed to do to keep the client happy.

At our first quarterly review, the team was excited to hear how they were doing. The client started the conversation by saying, “We’ve never seen this before, but you have become known as the agency of No”. My team was devastated. They felt like they went the extra mile, every time but yet it seem to go completely unappreciated. Turning this around wasn’t going to be easy.

The client felt we were constantly putting up obstacles to all their requests because we were always telling them why they shouldn’t do something. They felt they had to push us really hard to move till they threaten us or said something like, “I’m the client - do it!” It was harsh feedback but true. We spent so much time looking at the situation from our vantage point, we didn’t consider how it felt from the client. While we didn’t agree with the constant changing of direction, it was our job to enable it.

Beyond the client issue, I had a morale issue. My team felt dejected and not valued. Their intention was to do what was best for the client and it wasn’t received that way at all. Given the feedback, many of them did not feel motivated to want to continue to go above and beyond to keep the client happy.

In our post mortem, we identified that when a client asked for something that was beyond scope or different from the priorities at hand, we spent too much time trying to persuade them on why it was a bad idea. We also noticed that we kept taking on more and more work and allowing the client to overwhelm us with all the additional requests.

In our effort to reverse course we implemented a couple of new and simple rules:

Literally as we were leaving the strategy meeting where we came up with these rules, the client called the account director requesting us to make some last minute changes to a project due within a few days. Our account director stayed calm and simply said, “If you change the delivery date to a week from now we can accommodate the change or we can stick to the current scope and give you the additional change next week - which would you like?” The client said, “Keep the date for this week and send me the addition next week.” That was it. No threats and no persuasion. The account director said it felt liberating and powerful. The team followed her lead over the course of the quarter.

When we arrived at our next QBR, we were all nervous. We were hoping that we made some progress but given how the last review went down, we weren’t overly optimistic. The meeting started with the same opener, “We’ve never seen this before…”, our stomachs sank. Some people were on the verge of tears till they heard the rest of the sentence, “We’ve never seen this before, you have gone from the agency of No to the agency of Yes”. The team was so excited!

In the end, the client felt like we heard them because we stopped pushing back. However, it also seemed they valued our work so much more because they understood the price (or cost) of everything we did. Before, we just did it all with no price which made everything seem easy and doable and relatively valueless but now our work had value. Lastly, when we compared how much extra work we did in the first quarter compared to the second quarter, it was far less in the second quarter. We believe it’s because the client now had to make choices against their priorities which ultimately made them more discerning on what was really important.

When I left that agency, we had kept that client for over 10 years. I don’t think we could have kept them more than a few more weeks if we didn’t make those changes. So the next time your client says, “Jump!”, don’t ask “how high?”, ask, “how much?”

Tired of Being the Agency of No?

Client demands can be hard to deal with. In many cases, if they are not handled correctly they can lead to dissastlisied clients, reduced margins, employee morale issues, and competitive threats. It doesn't have to be this way.

Scotwork can help you protect your client relationships, improve margins, empower employees, and keep the wolves at bay. Let us help you put together a plan that addresses the obstacles standing in your way of greater success. Talk to one of our experts today.