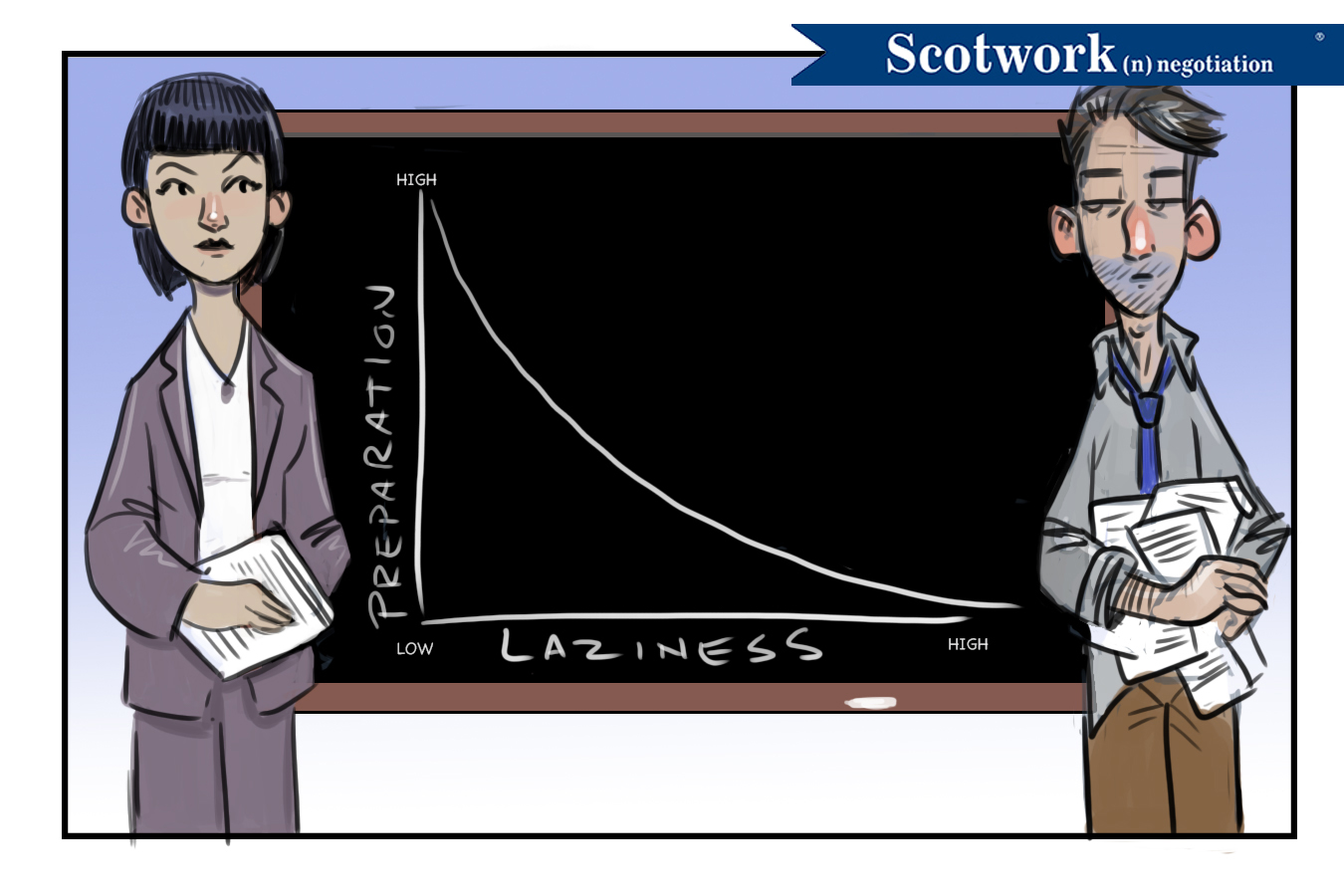 If you’re anything like me, you like to combine good results, with the least amount of work.

I was fascinated to hear President Trump claim last week that he “didn’t think he needed to prepare very much” going into his summit with Kim Jong-Un to discuss denuclearizing the Korean peninsula.

While we’ll all have to wait a few months to seriously measure the success or otherwise of that initial Singapore meeting, (and - like everything else in this deeply divided nation right now - opinions tends to be heavily influenced by which political party you happen to support), it got me thinking about the minimum amount of preparation necessary to go into a serious negotiation.

In other words, what would a smart, lazy negotiator do?

Those who have worked with Scotwork’s expert negotiators on live deals, or attended one of our training classes, will know we have a simple 5-point preparation agenda that can be used for almost any negotiation – sales, procurement, career – even very personal ones, like negotiating with your spouse or kids!

Some large complex deals require hours, days or even months of preparation to cover off on all the bases, and in my experience you won’t regret doing your homework.

But it’s also true that some deals suffer from “analysis paralysis”. There’s sooooo much time that we over-prepare, or we spend too much time on the wrong things. Some people would put the North Korean situation in that category – it’s been negotiated on and off for over 65 years, with literally three generations of North Korean leadership.

Maybe it IS time for some radical, impulsive spontaneity.

In that spirit, below are our best tips for the slothful negotiators, rated according to your Laziness Level. We’ve kept it short so that even those of you reading this while lying on the couch can make it all the way to the end…

This is where most of us sit – we care about the outcome, but we also want to avoid unnecessary work.

My advice for the time-constrained and calorie-challenged is to focus on just three things:

Your goal - What do you consider a good, realistic and specific outcome – in other words, what do you want? And finally

Your Walk-away Position- At what point is no deal better than a deal; in other words, what are your alternatives to dealing with the other party.

This list is, of course, incomplete – we haven’t covered information, concessions, other tradable variables, or even strategy. But if you’re quick on your feet, and know just these three things, there’s a good chance you won’t blow the deal up, or shake hands on a deal you’ll later regret (although it’s likely you’ll be leaving money – or nuclear weapons - on the table).

Okay, we get it, you’re really lazy, and Level 1 seems like far too much work.

In that case, focus on just two things – your own goal, and knowing your limit - but you have to be specific with both.

There’s great danger in going into a deal with a vague goal like “I want a pay raise”. By how much? Starting when? On what terms? What’s the minimum you’ll accept, and what happens if you don’t get it?

President Trump’s team publicly defined the US goal as “complete, verifiable and irreversible denuclearization”.Kim and Trump signed a document in Singapore committing to “working towards complete denuclearization of the Korean peninsula”, but there’s plenty of room for interpretation of that word “denuclearization” – the North has historically defined that as the removal of American nuclear capabilities from South Korea, not the unilateral removal of their own weapons. Time will tell.

All righty then. I hear you. You’re a fan of “winging it”, you have good “gut instincts”. You might even say that it’s “all about attitude”.

If you’ve only got time to think about one thing, then focus your clear blue eyes on your goal. Optimistic, realistic and specific objectives. Know what you want, and be able to clearly enunciate it to your team, and to the other side.

The number one mistake we see in our client’s preparation for large deals is the lack of a clear, specific goal, and a team that is completely aligned with that goal.

Strategy is extremely important, leverage and information too; but on the negotiator’s “Hierarchy of need”, both come below the clarity of objectives.

ONE MORE THING FOR THE TRULY LAZY…

I’ve always subscribed to the wisdom of that old Army saying “Time spent in reconnaissance is rarely wasted”. Many times the lack of good preparation costs you far more time in executing the deal, or in fixing the final agreement, than the time you saved by lazy preparation. Sign in haste, regret at your leisure.

If you’re truly lazy, don’t cut corners – do your homework up-front so you can laze around the pool, the beach - or even the sofa – at your leisure after the ink is dry.

HOW LAZY ARE YOU?

If you don't know or don't care, you should call us. We've been helping all different levels of lazy negotiators win the battle at the negotiating table. No matter how lazy you are, we'll help you get prepared for that critical negotiation and then we'll coach you all the way through it. Don't wait till its too late - talk to one of our experts today.