Would You Trust A Robot To Negotiate For You? 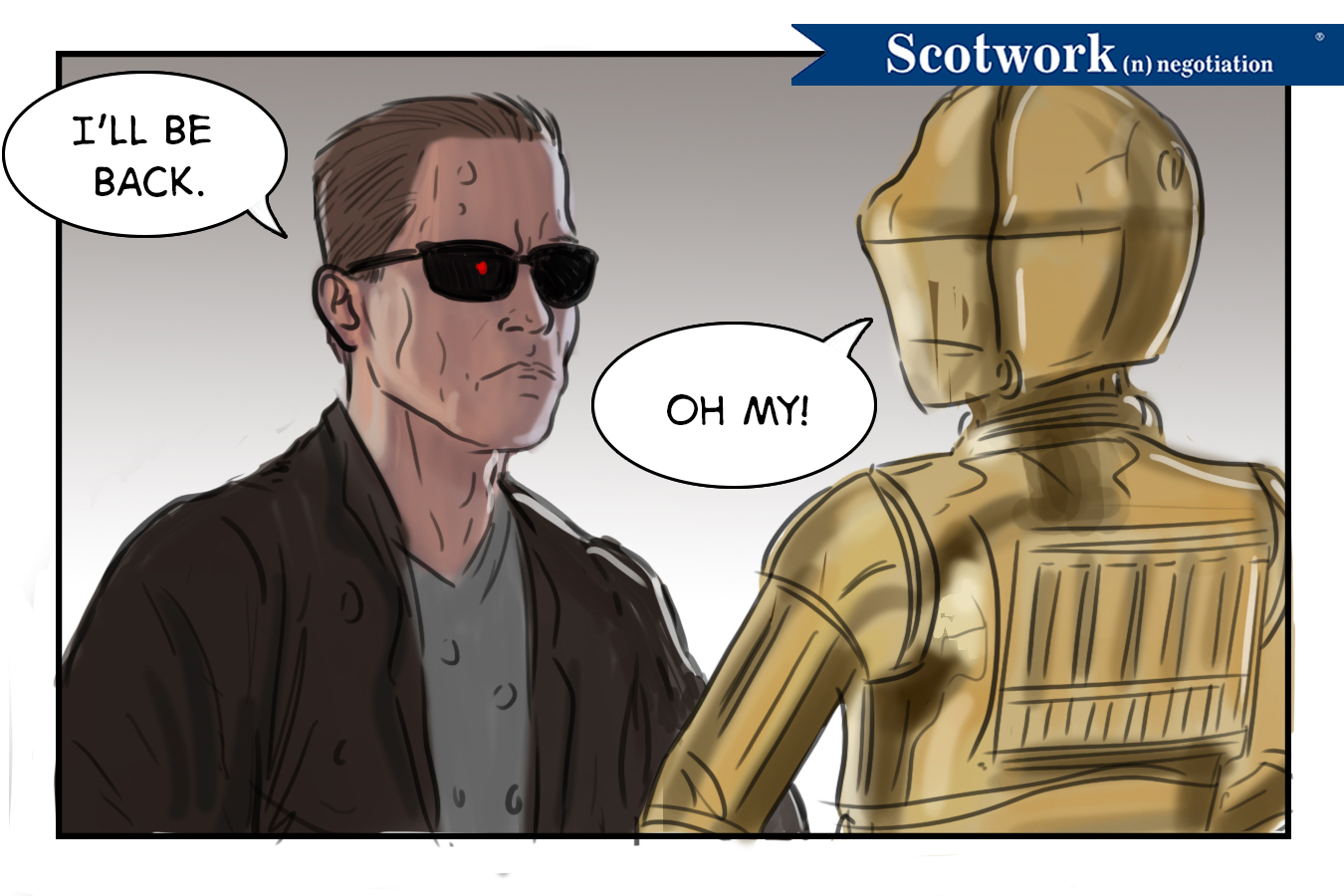 Often times we are asked, “what does the future of negotiation look like?” Some suggest that artificial intelligence (AI) will soon replace the need for people to negotiate. A recent research paper laid out an interesting roadmap to that reality. But the real question becomes, “would you trust a robot to negotiate on your behalf?”

We develop ten of thousands of negotiators a year world wide and one of the most common issues we deal with is fear. People are afraid to negotiate because they don’t quite know how to do it effectively or because they fear making a mistake and losing badly along with a variety of other reasons that paralyze people at the negotiating table. So I get the appeal of turning over the negotiating to an AI bot and having it negotiate for them.

Imagine a future where you have a choice between two extremes of AI negotiating bots. One is the relentless, single minded focus, and ruthless Terminator. It’s programmed to get you a deal at all costs and make sure you win. The other one is the beloved, master communicator, and etiquette savant C-3PO. It’s programmed to get you a deal but never at the expense of a relationship. Which would you choose? More importantly - would you choose a bot or still do it yourself?

Autonomous systems are already doing lower forms of negotiations. However, these bots are usually ruled based, hard coded, and rarely do they learn from their experience (a functional requirement of many AI systems). For example, much of the online advertising you see has been placed due to autonomous advertising exchanges negotiating ad rates in real-time on behalf of advertisers. In all reality these negotiations are more of a haggle (e.g. a one variable negotiation usually over price) than a true AI negotiation. Nonetheless, it’s happening and it’s happening without you.

At the 26th International Joint Conference on Artificial Intelligence (IJACI-17), there were three main obstacles that were laid out for AI negotiations:

Having domain expertise is required to lead a negotiation. Someone/thing that is the most knowledgeable about the relationship or situation at hand are more effective negotiators than those without domain expertise. It allows them to react on-the-fly and in real time to demands, requests, and signals that inevitably come up during a negotiation. It allows them to assign value to the situation and react accordingly. While it would be relatively easy for a bot to have all the historical domain information stored in some sort of database, teaching it preference elicitation on-the-fly is the more difficult task.

We make hundreds, if not thousands, of decisions and preferential choices throughout a negotiation. Everything from big decisions to the words we choose in responding to questions. Simulating this is no easy task and according to the research will require new performance-based metrics that can assess how supplementary preference information influences negotiation performance.

Another critical aspect to AI negotiators will be their ability to think long-term and with the perspective of negotiating with the same entity again in the future. Very few business negotiations are transactional (e.g. one and done) and even fewer have no long term impacts. Therefore, skilled negotiators are constantly thinking about the precedent they will set with their concessions and proposals. Inevitability, today’s negotiation will shape how future negotiations will be handled. Add the additional complexity that future needs and business preferences are often uncertain, it a complex issue for a negotiator to solve - AI or otherwise.

I believe the largest obstacle to overcome is where this post started, “would you trust a robot or AI to negotiate on your behalf?” In order for someone to turnover a negotiation to a bot or any other agent it must relinquish control and power. In effect, it’s the same as going to arbitration. Depending on the impact of the outcome of that negotiation, that could be a nonstarter for many negotiators. Could you imagine letting a bot negotiate your next pay raise? Or the next contract with your largest customer or vendor? Or the next nuclear arms treaty?

The bigger issue is going to be trust. Research shows that people become less fair minded and ethical when negotiating through a third party. However, with human agents and representatives there are at least moral and ethically bound principles that tend to guide most behavior. Imagine losing that with a bot. Would you trust a bot that is bound only by programmed decision parameters? Would you trust that it is working in your best interest or being a slave to its program? This, combined with loss of power and control, may be the ultimate non-starter for many negotiators.

While AI is certainly pushing the boundaries of many things that traditionally relied on human intuition and engagement, it seems there’s a long ways to go before autonomous AI negotiators take over. I would expect to continue to see a rise of AI usage in transactional forms of negotiations as well as the use of AI in supporting negotiations (e.g. optimal pricing models, strategic analysis, etc.). However, fully autonomous negotiators are well in our future and potentially something that is portrayed more science fiction than in reality for a very long time.

You don’t have wait for the future to get negotiation help today! We’ve seen it all at the negotiation table and our team of experts can help you win your next negotiation. Think of us as your secret weapon!

It doesn’t matter your experience level, or who you are up against, we can increase your negotiation intelligence today. Let us help you enable your success at the negotiation table. Talk to one of our experts today.

Brian Buck
More by Brian Buck:
Runaway?
Can a Trade Deadline Save Your Deal?
Back to Insights