A Proposal You Can’t Refuse 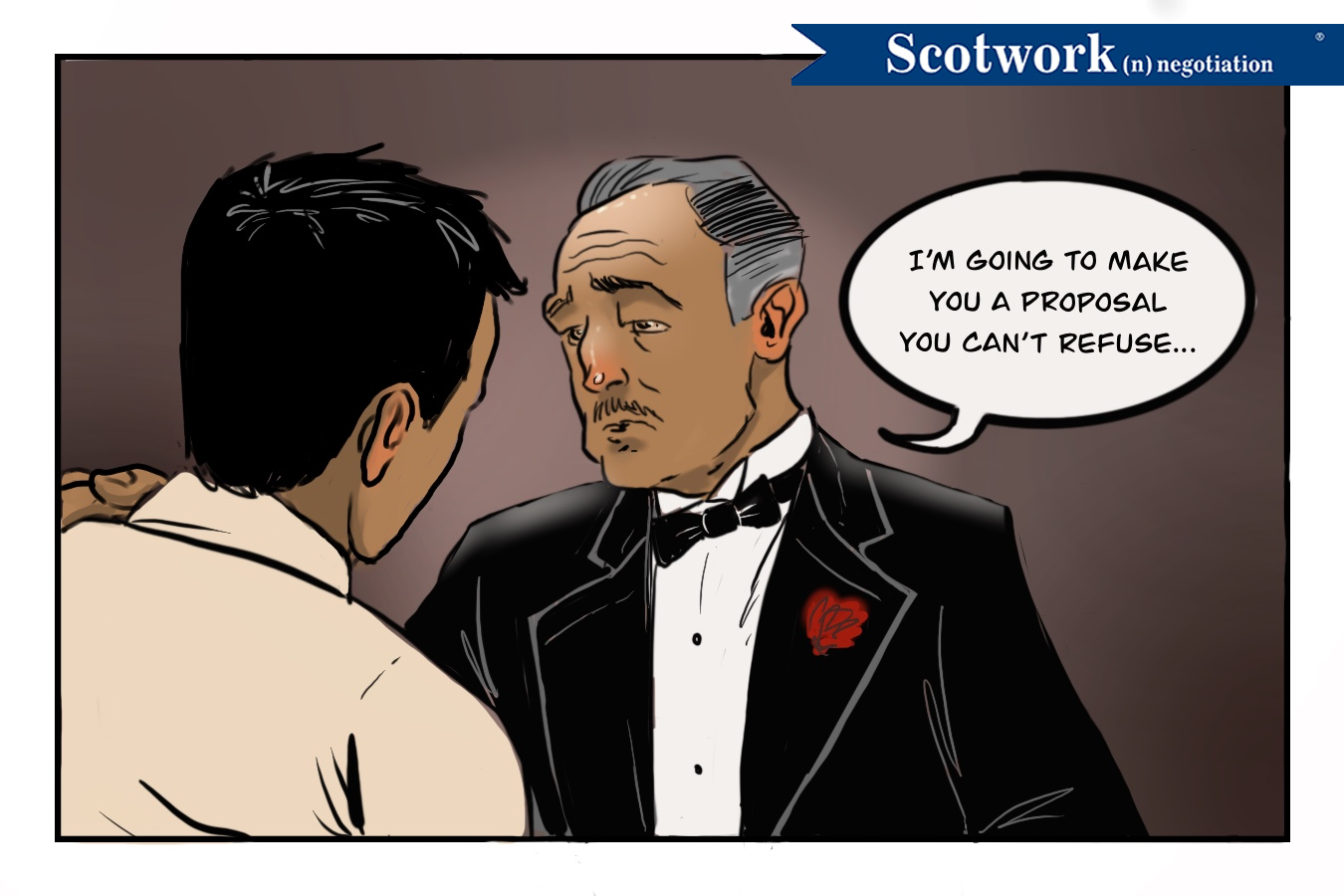 Like many of you, I’ve watched a lot of movies, documentaries, and TV shows. I keep waiting for Netflix to notify me, “There are no more suggestions for you!” Recently, I went back and watched the Godfather series. The line, “I’m going to make him an offer he can’t refuse” always piques my interest. We later learn that the offer was more of a threat than a credible proposal. Then again, there probably wasn’t much of a negotiation either. However, it got me to thinking about the other kinds of proposals we receive that tend to stifle negotiations.

Credible, realistic proposals help to advance negotiations. They’re a necessary step in the entire dealmaking process. That said, not all proposals progress the dialogue. In fact, some bring the negotiation to a grinding halt, or at least delay it significantly. Here’s a partial list of the most unhelpful proposals that you should absolutely refuse.

GODFATHER: We have to start here. It’s the classic threatening proposal: Do this or else! It’s often used to intimidate or bully one side into doing what the other side wants. It rarely works (unless you’re the Godfather, of course). When it does work, it does so due to an imbalance of power. Therefore, Godfather beware: When the power shifts, don’t be surprised when the other party comes back looking for what they lost . . . and then some.

FLYING PIG: This is a proposal that you would accept only when pigs fly. Put another way, it’s an absurd demand that will never be accepted. The Flying Pig usually occurs because the other side doesn’t have a realistic grasp of the situation or they’re out of touch with market conditions. A typical response is usually another Flying Pig! So when the pigs start to fly, be sure to duck.

SELFIE: This is a one-sided proposal focused only on the proposing part. These proposals are never accepted because they address only one party’s concerns. The Selfie is selfish! Selfies get rejected pretty quickly, and counter-proposals are usually Selfies, too, as both sides struggle to be heard. To pivot away from a Selfie, stitch together your Selfie with their Selfie to make a portrait. That’s usually a step in the right direction.

FINAL OFFER: This is it — there’s nothing else! When someone says, “Final offer,” it certainly comes across like a conversation-stopper. However, we find that most “final offers” are not actually final offers. The words are spoken more for effect than substance. Oftentimes, when someone is pushed on their final offer, they will move. The problem here is that if the negotiator moves from their “final offer” position, they lose credibility. If you say it’s final, then make sure it’s final or suffer the wrath of a more skilled negotiator taking your deal apart.

SUPERSTAR: “You’re the only one getting this deal!” Wow, superstar! Congratulations to you! These kinds of statements are meant to persuade you to stop asking for more. Since you’re the only they’ve ever offered this to, you should be grateful and move on. The reality is, you should take these platitudes with a grain of salt, particularly if they come up early in the deal. When you’re given a Superstar deal, ask for more and see what happens. (My bet is that it turns into a Loser proposal. See below for more on that.)

LOSER: This proposal is caveated with, “We’re losing money on this deal with you.” We’ve all heard that one. It’s actually a different version of the Superstar. It’s also a persuasive argument wrapped in a proposal that’s trying to get you to stop asking for things. But the reality is, even if they’re losing money on this deal, they’re doing the deal for a benefit of some sort. It should lead you to ask yourself, Do I know what they’re really getting out of this deal? That knowledge may lead to a better understanding of the deal’s true value.

URGENT: Act now, before it’s gone! Having a sense of urgency can help propel any conversation. However, when a proposal is artificially time-bound, it can erode trust and create resentment. The Urgent proposal can do just that. By nature, we’re creatures that will make a choice when presented with one. When we’re forced to make a choice under duress, we can actually feel paralyzed to the point that no choice will be made. Most of this is driven out of fear of making a poor choice.

In the end, the proposals that move a conversation forward tend to address everyone’s concerns. They’re not used to manipulate a feeling or behavior, but are a natural extension of the negotiating conversation. When presented from a credible and trustworthy source, they will propel a deal forward.

Let Us Help You Refuse an Offer They Dared to Make

Are you prepared to refuse a proposal that could bring your negotiation to a grinding halt? We can help! Drawing on 45 years of real-world negotiating experience, we’ll assist you with getting better deals, saving time, and creating value for all involved — not to mention preserving and even strengthening relationships. Let us partner you with one of our advisers, ensuring that you’ve got the broadest view of your deal.

Brian Buck
More by Brian Buck:
You’ve Been Lied To
Coal or Vaccine?
Back to Insights