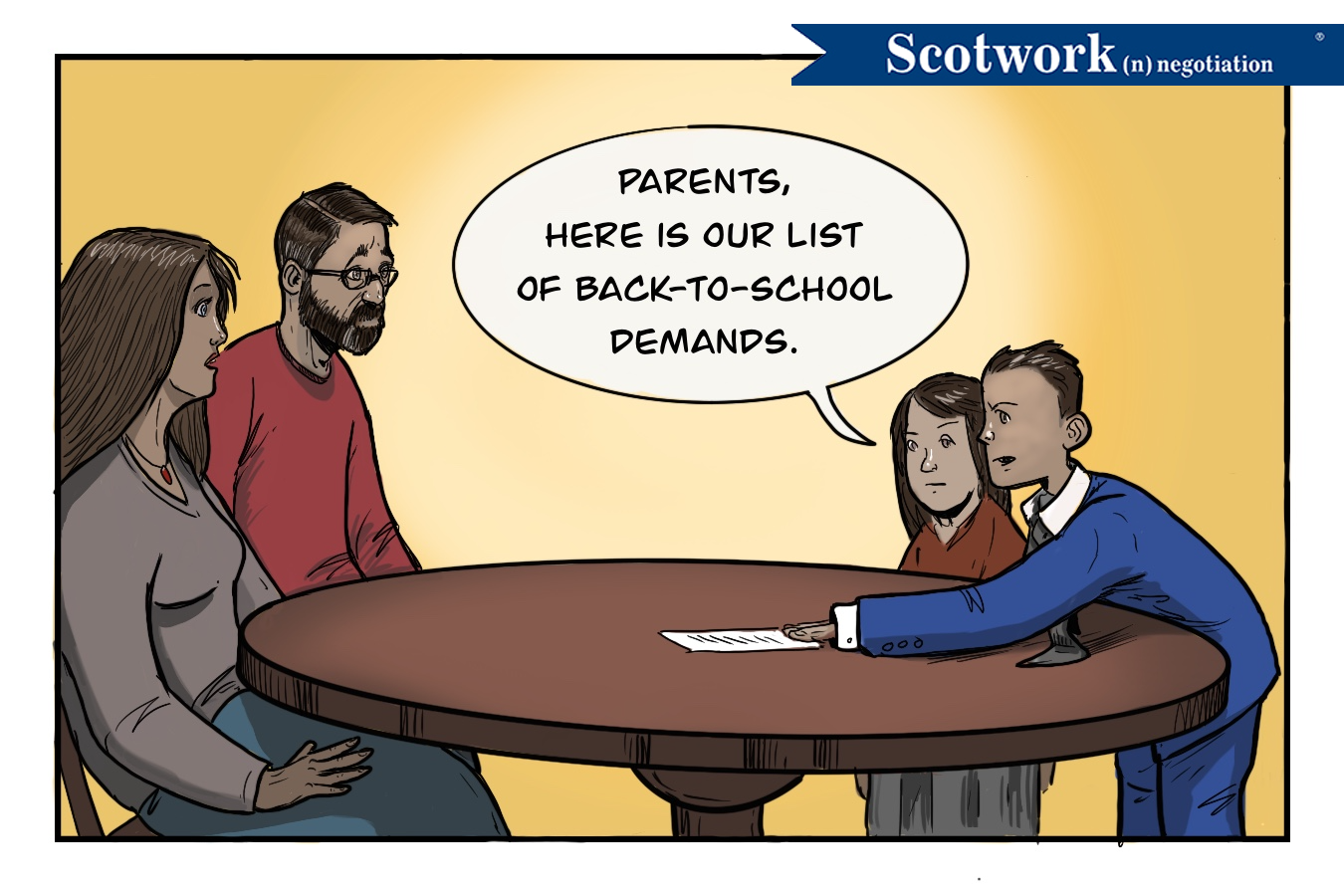 It’s back-to-school time! That either excites you or bums you out (this Staples ad from 1996 encapsulates it best). Even if you don’t have kids, back-to-school time means that there will be fewer people at your favorite attractions, and you can get great deals on paper and pens! As my kids head back to school, I’m reminded that negotiating isn’t just a business thing; it’s a family thing, too.

Here are a few situations in which my other approaches didn’t resolve some of the usual back-to-school issues, but negotiating did.

First up . . . bedtime. Now, my kids are old enough to make their own decisions regarding when they go to bed and how much sleep they get. When they were younger, however, this was a major source of conflict. Particularly as we went from later bedtimes in the summer to earlier bedtimes with back-to-school. While I thought I could take unilateral action and use my parental prerogative to just order them to bed because I said so, that tactic never really worked, because I always lost out to the dreaded temper tantrum.

The earlier bedtime got resolved pretty quickly when I started trading them those earlier bedtimes for a sleepover with a friend on the weekend, where they could stay up as late as they’d like. They got something they wanted, I got something I wanted, and we were able to put that to bed (pun intended).

Next up . . . school clothes. Not to sound like that guy, but when I was a kid, I got a new pair of jeans (usually something super stiff and unfashionable; anyone remember Toughskins?) and a new pair of shoes (that were supposed to last me an entire school year). I didn’t get an entirely new wardrobe! To be honest, my kids don’t expect a new wardrobe. In fact, they’re pretty frugal. However, they seem to want a little more than I want to give. This discussion almost always devolved into haggling over how much they could spend on clothes. They would want $XX to spend, I would give them only $YY to spend, and then someone would inevitably say, “Let’s split the difference.” The problem with this is that none of us was ever happy, because I gave more than I wanted and they didn’t get as much as they wanted — no matter how much we talked about it.

Being the daughters of a negotiator, they had me when they said that if I would give them $XX, they would agree to do extra chores so that their mother and I could have some extra time together on the weekends. It was a great deal. My wife and I did fewer chores and got more time back, and they were able to get the extra money they wanted for clothes. That was a great way to handle this situation with style.

Finally . . . homework. There’s no debate here about whether to do homework or not. Despite the staggering amount of homework my kids are assigned, both of them know that it has to be completed. The bigger debate is when to get it done. I’m a proponent of getting it out of the way, but they would rather let homework be the last thing they do before going to bed. After years of fighting about it, I realized that all I really cared about was that the homework got done — nothing else really mattered. So, our trade was that as long as the homework got done, when they did it didn’t really matter. Probably the simplest negotiation of the bunch.

I’m sure that many of you do a much better job than I did at handling these situations, and I’m not trying to tell anyone how to be a parent. (Believe me, I was a much better parent until I became one!) But I do appreciate how my profession can help me at home. I hope it can help you, too.

Let’s Go Back to School for Resolving Conflicts.

Whether business or personal, conflicts are conflicts. As such, conflict resolution techniques, including negotiating, can be applied. Have you tapped into negotiation’s full conflict resolution powers — whatever the conflict? We can help! Drawing on 46 years of real-world negotiating experience, we’ll assist you with getting better deals, saving time, and creating value for all involved — not to mention preserving and even strengthening relationships. Let us partner you with one of our advisers, ensuring that you’ve got the broadest view of your deal.

Brian Buck
More by Brian Buck:
Elephant in the Room
The DIY Dilemma
Back to Insights