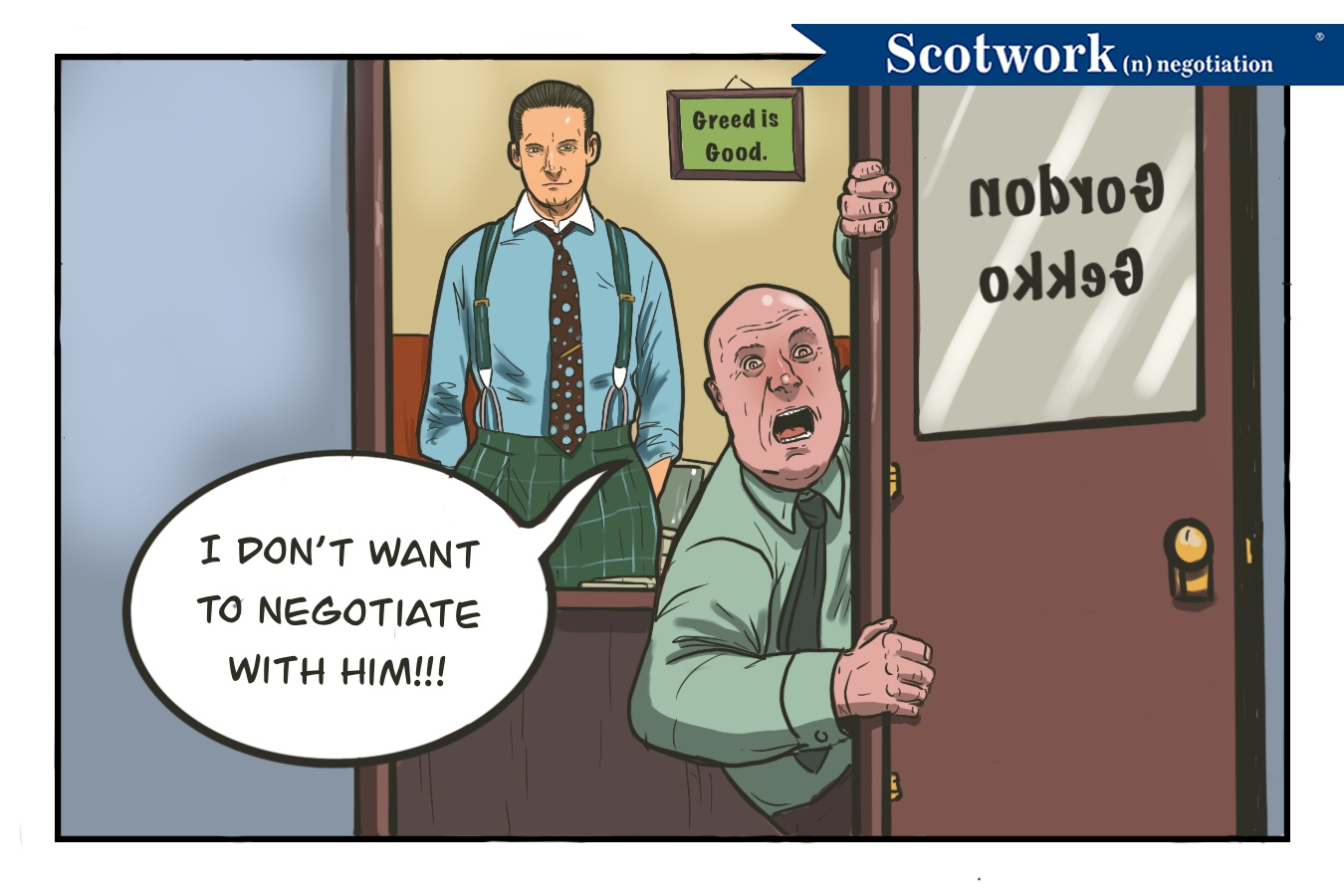 “Greed, for lack of a better word, is good,” said Gordon Gekko in the movie Wall Street. That sentiment has been the Achilles' heel of many negotiations. I was recently working with a group of people from a technology company who looked at negotiating as a win-lose proposition. They felt that it was all about dominating the other party, taking them for everything that you can. They literally believed that negotiation was the instrument of greed, and that notion has had a tremendous impact on how they resolve conflicts.

First, let me say that their notion couldn’t be further from the truth. Negotiating is not a taking exercise — it’s a trading exercise. It’s about creating a deal that all parties are willing to abide by or put into action. In order to do that effectively, it’s about creating value for all parties involved. If a deal is struck yet it’s one-sided or doesn’t create enough value for both parties, then that deal’s likelihood of surviving is small. But when both parties see value, then not only will they usually stick to the deal, but they will also spend discretionary effort to protect the deal.

The group I was working with never thought about negotiating in that manner. They were under the impression that negotiating was a “last resort” measure used to take advantage of the other side. As a result, they would avoid it. To their credit, taking advantage of someone is not part of their corporate culture. In fact, they take a stakeholder orientation approach and do what they feel is right for all involved. However, because they avoid negotiating, they find themselves in other predicaments when seeking to resolve conflict.

Their most popular conflict resolution technique was to just give in. It was born out of a service mentality and the belief that the client is always right. When a client would ask for something, they would reply, “No problem.” That worked just fine for small requests, and clients do appreciate their service mindset. However, for larger requests, it’s become a problem because they’ve set a precedent of doing things for clients that they should really be charging for. But now, clients have come to expect those things.

Another of their approaches is a good old-fashioned sales pitch. This is where they try to use persuasion to convince their clients that they shouldn’t be doing what they’re asking them to do. In fact, they’ve gotten very good at bringing together facts, data, and logic to create compelling arguments. When this approach works, it’s great. But problems arise when their client doesn’t see the world the same way they do or they have their own facts, data, and logic patterns that run counter to my client’s. That’s when persuasion can actually waste time, create frustration, and raise tension. When it goes too far, my client just defaults to giving in.

Yet another of their techniques is problem solving. They are a solution-based organization, so they’re used to solving problems. In fact, it’s probably the thing they’re the best at. They like to joke that they’ve never met a problem that they didn’t like. So, when a client brings up a problem, it’s all hands on deck to solve it! Personally, I like to problem-solve, too, because it’s very collaborative and usually produces outcomes that everyone can get behind. But it does require one key element: We both have to look at the problem the same way. For instance, if I look at a problem as a resource problem and the other side looks at it as a timing problem, each of us will go about solving it differently. This can waste time, create tension, and lead to no solution at all. When that happens for my client, they default to giving in.

Ironically, all of the techniques they use to resolve conflicts are effective in the right circumstances, but they all have their limitations — just as negotiating does. But negotiating becomes a great alternative when the aforementioned techniques aren’t working or they aren’t appropriate given the circumstances.

Skilled negotiators know the value they bring to the table. They understand what they need from the other party in order to give them what they’re asking for. And they know how to craft winning, valuable deals that everyone will be willing to put into play. All of that can be done without being greedy.

We Can Help You Negotiate Conflict Resolution.

Have your attempts at conflict resolution — i.e., problem solving, good old-fashioned persuasion, or just giving in — proven to be ineffective, resulting instead in wasted time, increased frustration, and growing tension? We can help! Drawing on 46 years of real-world negotiating experience, we’ll assist you with getting better deals, saving time, and creating value for all involved — not to mention preserving and even strengthening relationships. Let us partner you with one of our advisers, ensuring that you’ve got the broadest view of your deal.

Brian Buck
More by Brian Buck:
A Tale of Our Times
More Important Than Price?
Back to Insights