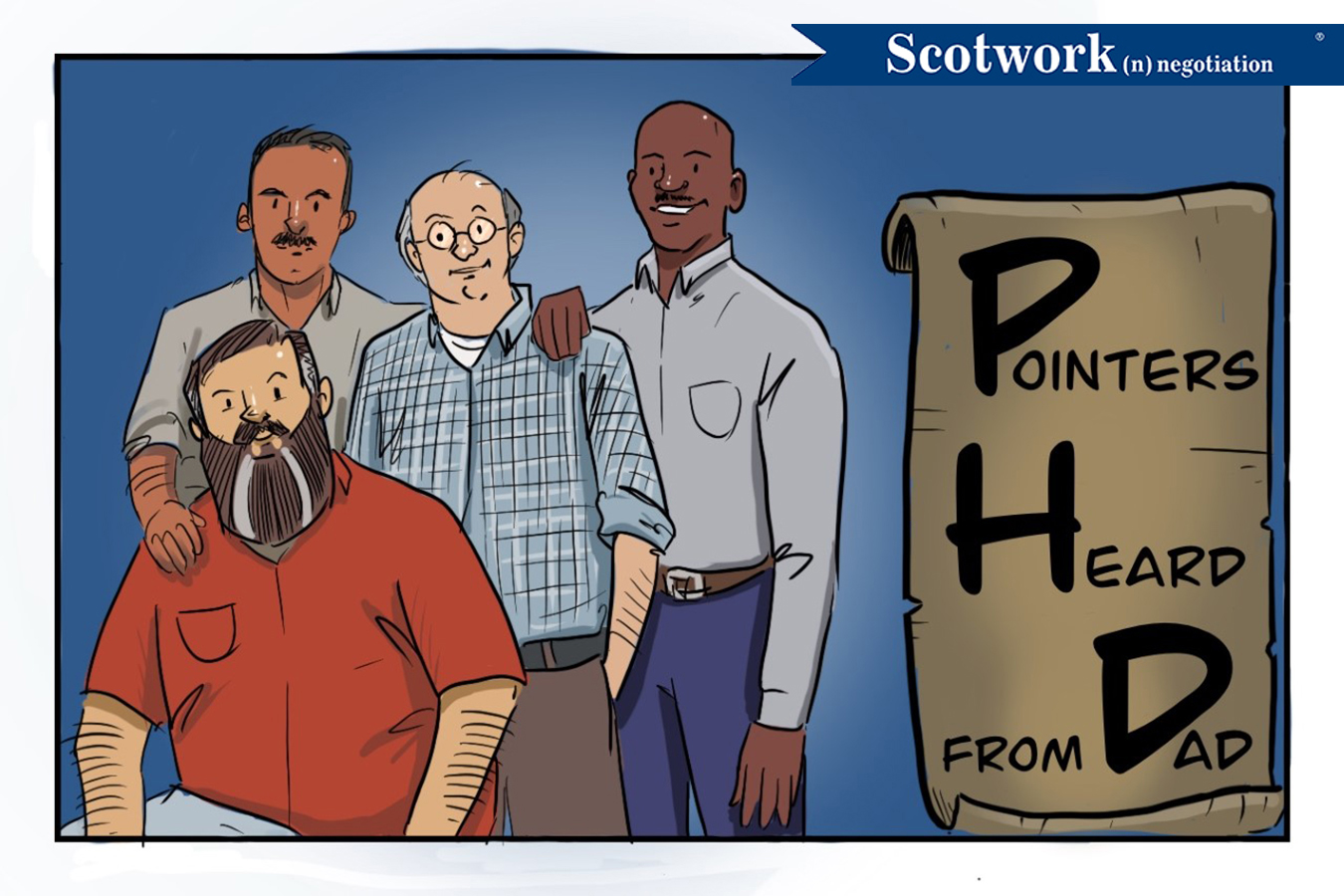 It’s June — the month of school letting out and graduations, the start of summer, and, of course, the time to celebrate Father’s Day. After 18 years of being a father, I’ve learned one thing for certain: It’s hard! Don’t get me wrong, I love being a dad, and there are so many great rewards to being a parent, but I don’t think anyone can quite articulate how challenging it is to be a good parent. Just when you think you’ve got something figured out, you don’t. What worked when the kids were younger doesn’t work once they’re older. Along the way, many of us turn to our parents, other parents, mentors, and the like for good advice — I know I have.

This past week, I asked my team to share advice they picked up from their fathers, which we’ve gathered here as Pointers Heard From Dad (aka our P.H.D.). Between that and our Mom's Best Advice (aka our M.B.A.), some of us have had pretty good guidance along the way.

On this Father’s Day, here’s to all the dads who passed on their wisdom to help make all of our lives a little easier. Enjoy.

To lead things off, negotiation expert Jill Campen shared this bit of wisdom from her dad, Ellis: “Tell the truth and always put forth your best effort.” These two fundamentals, she adds, “have proven sound advice in my education, athletics, marriage, friendships, and career.”

“My dad was an engine room mechanic on a destroyer in the Pacific in World War II,” says negotiation expert and Scotwork SVP Rich Waldrop. “He later taught industrial technology at East Carolina University. He could fix anything and everything, and his motto was, ‘If it’s already broken, you can’t make it any worse, so try to fix it.’ I love the challenge of trying to repair things before paying someone to do it and have tried to pass that mindset on to my children.”

Here’s a piece of advice given to Scotwork SVP, negotiation expert, and procurement specialist Sandy Sbarra by his dad, Joseph: “When I was a young buyer, he said, ‘Don’t get spooked by the big numbers — they’re just little numbers with more zeros. If it’s a good decision, stick with it no matter the value.’”

According to negotiation expert Gaëtan Pellerin’s dad, Réal, “Even if you are good or the best at what you do, it doesn’t mean that other people are less than you.”

“Love people and use things — not the other way around,” advised negotiation expert Randy Kutz’s father figure, Timothy.

Our man in Canada, Dave Mahr, learned the following from his dad, Ernest: “Nobody can take away your self-esteem. Help others and everything else will fall into place.”

Scotwork Program Coordinator and go-to operations guy Mike Sap shared this pointer from his dad, Fred: “Focus on the important things in life. Don’t get bogged down with the stuff that doesn’t matter.”

“Trust your gut!” said negotiation expert Simon Carkeek’s dad, Chris. “He wasn't a risk-taker or even particularly spontaneous,” Simon recalls, “but he was intuitive. When I was considering buying my first home with my then girlfriend (and now wife), I got cold feet. We’d been together less than two years, we were too young, it was too much money . . . My dad listened calmly to my fears and then asked, ‘Yes, but deep down, does it feel right?’ This question removed the fear and helped me see that I was making the right decision. I’ve used this philosophy throughout my life, personally and professionally, and it’s generally helped me make better choices. Thank you, Dad.”

“You catch more flies with honey than with vinegar,” noted Scotwork Marketing Director Trevor Murphy’s dad, Eric. “He was a salesman with a bold sense of humor,” Trevor says. “He would sometimes mention a third item that flies prefer even more than honey, which included a separate lesson: That might not be what you enjoy, but you can get the most attention from people if you figure out what they really want.”

“Always make deals during the full moon.” This according to negotiation expert Millie Davis’ dad, Les. Seriously, though, Les has imparted some sage advice, typically through his actions. “He always gave his best offer up front,” Millie says. “But the reason he could do that was because he had taken the time to understand what his customer needed. He would spend time getting to know them and their needs so he could give them an offer that would meet their needs. He has always been a very authentic salesman and negotiator who people trust because he was always honest and transparent.”

As for our VP of Sales, Michael Roche, he received this character-builder from his dad, Billy: “It’s easy to do the right thing when all eyes are on you. It takes someone special to do it when no one is watching.”

And then there’s my P.H.D., which comes from my dad, Ron. Interestingly, the thing I probably heard most from him was, “If they didn’t want to negotiate, they wouldn’t have put a price on it.” If only he knew what I would eventually do with my life!

The one thing I took away from everyone’s P.H.D. is that our dads seemed to have a practical approach to life. Maybe that’s one of the secrets to all of this: Actions mean more than words.

Happy Father’s Day to all the dads out there. Cheers!

Brian Buck
More by Brian Buck:
The Oscar For Best Negotiation
A Proposal You Can’t Refuse
Back to Insights