Get Used to Disappointment 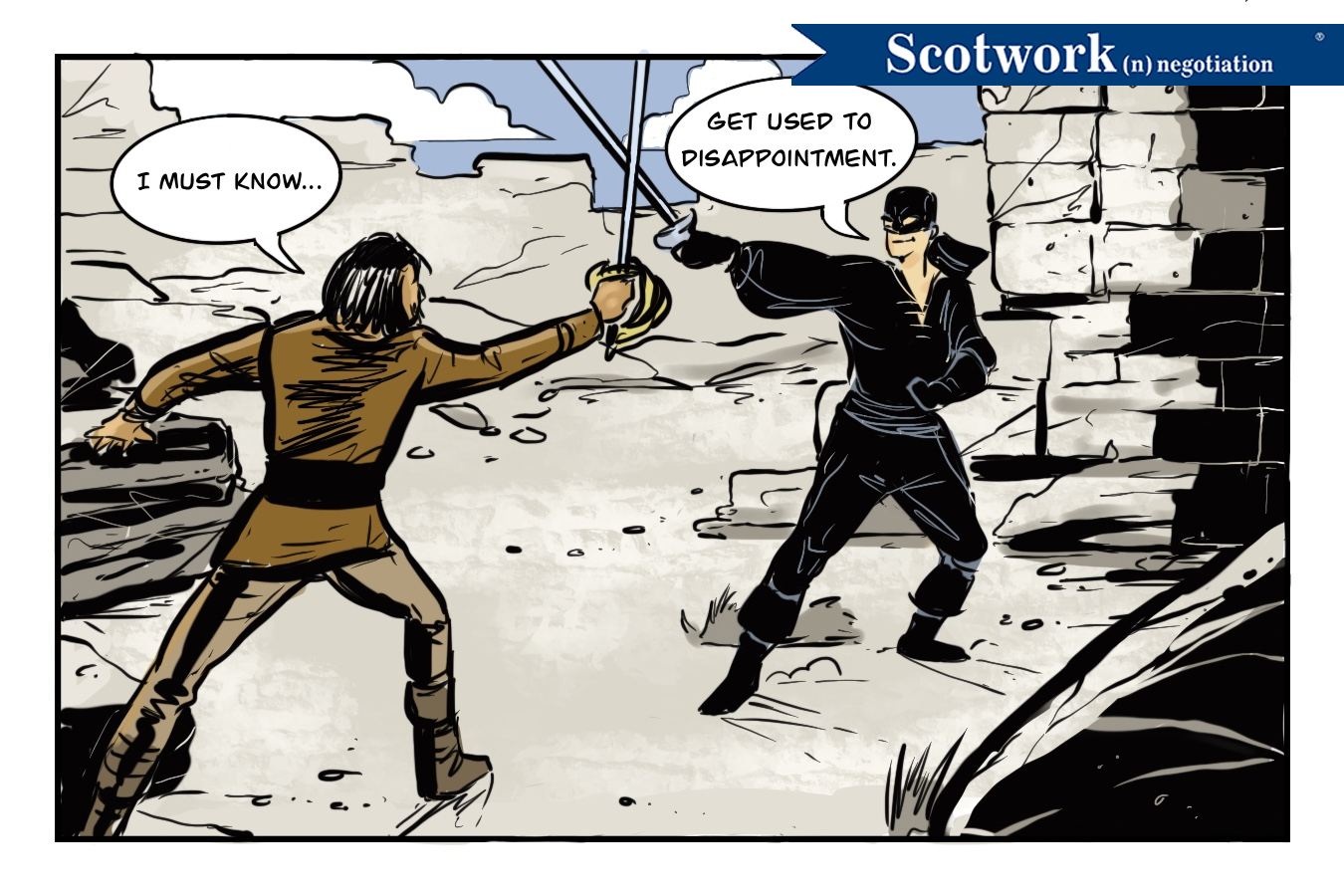 During The Princess Bride’s epic sword fight scene, Inigo Montoya asks his opponent, Westley, who he is. Westley responds, “No one of consequence.” Not satisfied, Inigo pleads, “I must know,” to which Westley replies with a life lesson: “Get used to disappointment.” Little did Westley know, that’s exactly what all negotiators must overcome — disappointment. Every negotiator walks into a negotiation with expectations and, at some point, faces the reality that so does the other side. How dealmakers navigate their own expectations will have a tremendous impact on the outcome of their negotiation, including whether they’re satisfied or disappointed.

Years ago, I developed the retail marketing strategy for the launch of a new cell phone provider. We tested the strategy in a few markets, and it worked very well — quite frankly, even better than I’d expected. So much so that the client rolled out the strategy nationwide. They were able to replicate the success we had in the pilot and, building on that success, they were eventually bought by a large provider. My piece in the journey wasn’t the sole reason for their success, but it was a critical component to their growth. That said, imagine my surprise when, shortly after the nationwide rollout, they wanted to take our relationship out to bid. I was shocked and angry. After all, it was my strategy that ignited their growth. We had done everything right for them, and then some, and they wanted to take our relationship out to bid?! Why was I angry? Expectations.

Needless to say, I had a hard time controlling my emotions. I felt slighted. I expected that if I did good work for them, then they would continue as our client. And if I went above and beyond, then they would lavish us with praise and pay us whatever was necessary for the honor of being our client. I didn’t feel that it was unreasonable — OK, maybe the latter scenario was a little unreasonable — to think that way. Unfortunately, my expectations of them poisoned our relationship. I couldn’t fight the resentment. I felt like I was owed something, and they needed to do more for us. Eventually, we lost them as a client. What I failed to realize was that they had expectations, too, and neither of us expressed those expectations to each other.

Merely expecting something to happen will not make it happen. However, it’s one of the greatest flaws of negotiators. When we begin a negotiation, there’s an implicit social contract. Meaning, without actually verbalizing anything, there are already expectations about how everyone will behave. When the other side doesn’t meet those expectations, the road to disappointment is laid. The key to success for any negotiator is to not let expectations go unspoken. The only way to have a chance at getting what you want is to begin by telling the other side what it is that you want. Examples include:

However, it’s unrealistic to think that, just because you’ve communicated your expectations, the other party will do what you want. Getting what you want requires constant reminders throughout the negotiation. In fact, it also necessitates continual reinforcement. When expectations are met, reward the other side with positive reinforcement and gratitude in order to continue to strengthen your agreements. When expectations are missed, before reacting emotionally, take a moment and ask, “Why?” Typically, when something unexpected happens, we assume the worst and may even react in kind. However, doing a little investigating can help you to distinguish between a potentially honest mistake and a conscious decision to break the rules — each of which would invoke a vastly different response.

Is a lack of expressed expectations leading to disappointment at the negotiating table? We can help! Drawing on 45 years of real-world negotiating experience, we’ll assist you with getting better deals, saving time, and creating value for all involved — not to mention preserving and even strengthening relationships. Let us partner you with one of our advisers, ensuring that you’ve got the broadest view of your deal.

Brian Buck
More by Brian Buck:
Mindless Negotiator
I Screwed Up
Back to Insights